Construction of the fort began in 1845 as part of a mid-19th century plan to defend the southeast coast through a series of forts after the War of 1812. Thompson Island, at the southwest tip of Key West, was selected as the site for the fort in 1822 and plans for the fort, drawn up by Simon Bernard and Joseph G. Totten, were approved in 1836. Two supporting batteries, Martello Towers, provided additional coverage, one of which exists today as the Martello Gallery-Key West Art and Historical Museum. The fort was named for United States President Zachary Taylor in November 1850, a few months after President Taylor's sudden death in office. The fort's foundation consists of oolitic limestone and New England granite. Its five foot thick walls rose 50 feet above mean low water, and included two tiers of casemates plus a terreplein or barbette at the top. Three seaward curtains 495 feet between bastions, each containing 42 guns on three levels, were augmented by a land facing gorge. Troop barracks were built into this gorge with a capacity for 800 men. At either end of the barracks was a large gunpowder magazine while a Sally port was located in the center, connected to land by a 1200 foot causeway. Rainwater was collected in underground cisterns along the perimeter of the fort. Yellow fever epidemics and material shortages slowed construction of the fort, which continued throughout the 1850s. The Pensacola, Florida firm of Raiford and Abercrombie provided the bricks for Fort Zachary Taylor and Fort Jefferson, which was also under construction at the same time.

At the outset of the U.S. Civil War on 13 Jan. 1861, Union Captain John Milton Brannan, moved his 44 men of the First U.S. Artillery from Key West Barracks to Fort Taylor. His orders were to prevent the fort from falling into Confederate hands. The fort then became a key outpost to threaten blockade runners. Major William H. French arrived in April with his artillery unit.

In 1898, the fort was reduced down to the second floor and Battery Osceola was added to the south casemate. The battery consisted of two 12 inch artillery pieces. The Civil War ere pieces were used as fill, being buried within the new battery to save on materials. Battery Adair was added to the west casemate and included four 3-inch, 15-pounder Rapid Fire rifles.

The fort was heavily used again during the 1898 Spanish–American War, World Wars I and II, and the Cuban Missile Crisis. 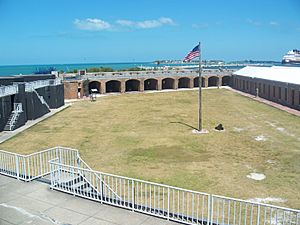 Fort Zachary Taylor Parade Ground as seen from Battery Osceola, with the Civil War barracks on the right, the North Curtain rooms in the background, and Battery Adair on the left.

In 1947, the fort, no longer of use to the U.S. Army, was turned over to the U.S. Navy for maintenance. In 1968, volunteers led by Howard S. England excavated Civil War guns and ammunition buried in long-abandoned parts of the fort, which was soon discovered to house the nation's largest collection of Civil War cannons. Fort Taylor was therefore placed on the National Register of Historic Places in 1971 and designated a National Historic Landmark in 1973. Due to the filling in of land around the fort, including the creation of an attractive stretch of beach, the park now occupies 87 acres (352,000 m²).

The fort's land that is closer to downtown Key West became part of the Truman Annex to Naval Air Station Key West. The annex was originally a separate major installation known as Naval Station Key West and, until its closure in 1974, included a submarine base.

President Harry S. Truman used Naval Station Key West for his Winter White House for 175 days in 11 visits. The Secret Service had a private beach built on the land for the president's security, but he reportedly only visited it once, preferring the public beaches. The beach name is called "Truman Beach." The fort, along with its related support buildings, was later renamed for Truman.

Naval Station Key West was decommissioned in 1974 as part of post-Vietnam War force reductions because the U.S. Navy had decommissioned nearly all of their diesel-electric submarines and contemporary nuclear powered submarines were too large for the station's existing port. Most of the then-former naval station became an annex (e.g., Truman Annex) to the remaining Naval Air Station Key West and served as the landing point for many during the 1980 Mariel boatlift of Cuban refugees. Those buildings in the Truman Annex and associated real estate not retained by the U.S. Navy as part of NAS Key West were sold to private developers. There is a museum for the Truman White House and the U.S. Navy continues to own and maintain the piers and that portion of the former Naval Station Key West property to the south of Fort Taylor, primarily in support of Joint Interagency Task Force South (JIATFS) and the Naval Security Group Activity (NAVSECGRUACT Key West).

In addition to the role of the fort and its adjacent beach as tourist attractions, Fort Taylor is also the location of a number of annual events, including week-long Civil War reenactments. On the weekend preceding Halloween, it is transformed into a haunted fort, much like a haunted house but on a grand scale and with a distinctive Civil War theme.

All content from Kiddle encyclopedia articles (including the article images and facts) can be freely used under Attribution-ShareAlike license, unless stated otherwise. Cite this article:
Fort Zachary Taylor Historic State Park Facts for Kids. Kiddle Encyclopedia.