Spaghetti with meatballs facts for kids 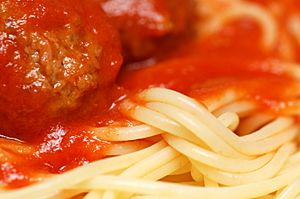 Close-up view of spaghetti with meatballs

It is widely believed that spaghetti with meatballs was an innovation of early 20th-century Italian immigrants in New York City. The National Pasta Association (originally named the National Macaroni Manufacturers Association) is said to be the first organization to publish a recipe for it, in the 1920s.

Italian writers and chefs often mock the dish as pseudo-Italian or non-Italian because, in Italy, meatballs are smaller and only served with egg-based baked pasta.

However, various kinds of pasta with meat are part of the culinary tradition of the Abruzzo, Apulia, Sicily, and other parts of southern Italy. A recipe for rigatoni with meatballs is in Il cucchiaio d'argento (The Silver Spoon), a comprehensive Italian cookbook known as the "bible" of Italian cooking.

In fact, in Abruzzo chitarra alla teramana, is a long spaghetti-like pasta served with small meatballs (polpettine). It is traditional made-in-Abruzzo recipe. It is a generally a first course (primo piatto) prepared with chitarra pasta cut with a traditional tool called “chitarra” or guitar-like strings tool. They are seasoned with meat or vegetable ragù and served with pallottine (little balls, which are actually meatballs). 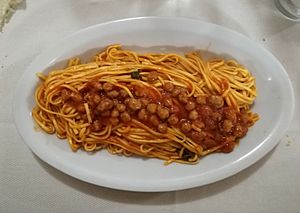 Other dishes that have similarities to spaghetti and meatballs include pasta seduta 'seated pasta' and maccaroni azzese in Apulia.

Some baked pasta dishes from Apulia combine pasta and meat where meatballs, mortadella, or salami are baked with rigatoni, tomato sauce, and mozzarella, then covered with a pastry top.

Other pasta recipes include slices of meat rolled up with cheese, cured meats and herbs (involtini in Italian) and braciole ("bra'zhul" in Italian-American and Italian-Australian slang) that are cooked within sauce but pulled out to be served as a second course.

All content from Kiddle encyclopedia articles (including the article images and facts) can be freely used under Attribution-ShareAlike license, unless stated otherwise. Cite this article:
Spaghetti with meatballs Facts for Kids. Kiddle Encyclopedia.