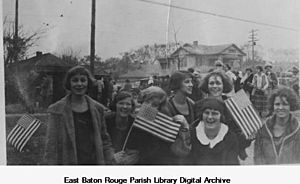 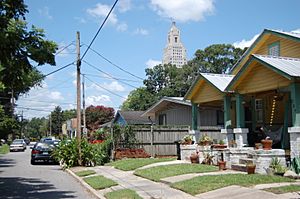 Lakeland Drive in Spanish Town, with the Louisiana State Capitol

Spanish Town (Spanish: Ciudad española) is a historic district anchored by Spanish Town Road in Baton Rouge, the capital city of the U.S. state of Louisiana. It is well known for its annual Mardi Gras parade, which is the largest in Baton Rouge.

Spanish Town was commissioned in 1805. It is the oldest neighborhood in Baton Rouge, and its 49.4 acres (20.0 ha) area, comprising 258 contributing properties, was added to the National Register of Historic Places on August 31, 1978. The area has gone through many developmental changes, and its surviving structures range in date from 1823 to 1975. The oldest structure is the Pino House (built 1823). The individually listed Potts House and Stewart-Dougherty House are also part of the historic district since the time of its creation.

The area is home to a variety of people from many different social classes. Spanish Town was at one time particularly renowned for possessing a higher-than-average proportion of gay residents, though this has waned over the years with urban gentrification.

The neighborhood of Spanish town was commissioned in 1805 by the governor of West Florida, Don Carlos de Grandpre. According to the Baton Rouge State Times (Oct. 18, 1980) "When Galvez Town, twenty miles southeast of Baton Rouge, was ceded in the Louisiana Purchase to the United States in 1803, the Canary Islanders who lived there asked to come to Baton Rouge in order to continue living on Spanish soil. In 1805, Don Carlos de Grandpre (Charles Grandpre), governor of West Florida drew up the layout of an area east of the fort 'out of cannon shot' that became known as Spanish Town." Its original inhabitants were mostly Spanish families who had previously been living in Galvez Town, which was one of the original Spanish settlements in West Florida. Much of the West Florida area, though owned by Spain, was actually inhabited by people of English descent, who disliked being under Spanish rule. The city of Baton Rouge was a mainly Anglo area, but the settling of Spanish Town allowed the Spanish citizens of West Florida a place for their culture and language to thrive. The Civil War brought destruction to the area and left only a few homes and buildings standing, and the area was mostly abandoned.

In years following the Civil War, Spanish Town was mostly populated by African Americans, many of them freed slaves looking for work in Baton Rouge. Homes and churches were built, and the neighborhood grew busier. The founding of Louisiana State University had an influence on the neighborhood, which, between 1890 and 1920, grew to inhabit and cater to students and faculty of the university. 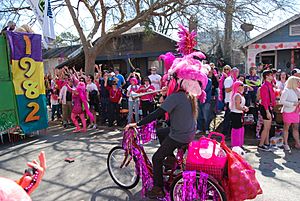 Spanish Town is the site of Baton Rouge’s largest Mardi Gras parade, which is celebrated annually on the Saturday before Mardi Gras. The first Spanish Town Mardi Gras parade took place in 1981 as a way for residents to “celebrate their difference.” Allegedly this first parade was very small, and consisted of a few children on foot playing instruments and throwing trinkets to the crowd. It has since grown to include elaborate floats and has adopted a very sarcastic and raunchy tone; in other words, it is not considered “family friendly.” Each year has a different theme. Typically, though, no matter the theme, the floats tend to offer crude political commentary, usually about local and national power figures. There are Krewes, as is seen in the traditional Mardi Gras parades in New Orleans, but they are more informal than those in New Orleans Mardi Gras, as demonstrated by their humorous names, such as “Krewe of Roadkill” and “Wasted Krewe.” The unofficial mascot of the parade is the pink flamingo, which has since become the unofficial mascot of the entire neighborhood of Spanish Town.

The unofficial mascot of Spanish Town is the pink flamingo. It is said to represent the saying “poor taste is better than no taste at all,” which became somewhat of a mantra for the Spanish Town neighborhood as it grew to include more eccentric residents. There is a unique tradition in Baton Rouge involving pink flamingos that originated from the celebration of Spanish Town Mardi Gras. Around the beginning of the Mardi Gras season, approximately two dozen large pink flamingos made of plywood are placed in the LSU Lakes, adjacent to LSU, to announce that the date for the annual Mardi Gras ball has been announced. It is a tradition to “kidnap” one of these flamingos, usually by taking a boat out on the lake, and use it as a yard or home decoration. There is a unique sense of pride associated in having acquired one of these special flamingos.

All content from Kiddle encyclopedia articles (including the article images and facts) can be freely used under Attribution-ShareAlike license, unless stated otherwise. Cite this article:
Spanish Town, Baton Rouge, Louisiana Facts for Kids. Kiddle Encyclopedia.