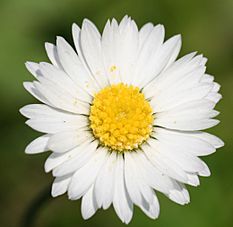 The purpose of a formal name is to have a single name which is accepted and used worldwide for a particular plant or plant group. For example, the botanical name Bellis perennis was given to a plant species which is native to most of the countries of Europe and the Middle East, where it has various names in many languages. Later it has been introduced worldwide, bringing it into contact with more languages.

The cultivar Bellis perennis 'Aucubifolia' is a golden-variegated horticultural selection of this species.

Parts in a name

A binary name consists of the name of a genus and an epithet.

Bellis perennis is the name of a species, with perennis the specific epithet. There is no connecting term involved, to indicate the rank

All content from Kiddle encyclopedia articles (including the article images and facts) can be freely used under Attribution-ShareAlike license, unless stated otherwise. Cite this article:
Botanical name Facts for Kids. Kiddle Encyclopedia.