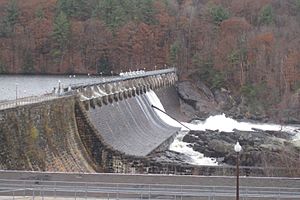 The Spier Falls Dam is a hydroelectric dam on the Hudson River between the towns of Moreau, New York and Lake Luzerne, New York. 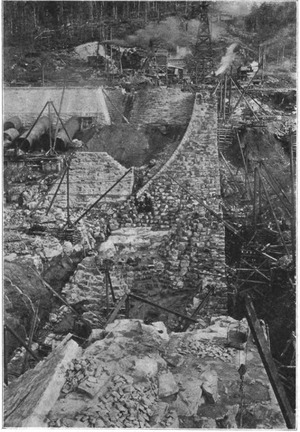 The dam was built by the Hudson River Water Power Company. The chief engineer was Charles E. Parsons of Glens Falls. Construction started in 1900 and completed in 1903 at a total cost of $US3,000,000. At the time it was the fourth largest dam and the largest power dam in the world.

The dam is constructed of concrete and granite quarried nearby– a rubble core with trimmed blocks on the surface. Up to 280,000 cubic yards (210,000 m3) of rock and dirt were moved during construction. As many as 1500 men were employed in construction at one time

When built the dam generated 37 MW, of three-phase 40 Hz power, and provided electricity to Saratoga, Schenectady, Glens Falls, Troy, and Albany. As of 2013 the Spier Falls Dam is owned by Brookfield Power and generates 56MW.

While the reservoir was filling the flow of the Hudson River was halted for twenty-four hours. The river ran dry past Fort Edward and pedestrians were able to walk across.

The dam was named for William E. Spier, the head of the Glens Falls Paper Company.

All content from Kiddle encyclopedia articles (including the article images and facts) can be freely used under Attribution-ShareAlike license, unless stated otherwise. Cite this article:
Spier Falls Dam Facts for Kids. Kiddle Encyclopedia.