Fort Edward is a town in Washington County, New York, United States. The population was 10,205 at the 2011 census. It contains the county seat of Washington County, located at a municipal center complex on U.S. Route 4 between the villages of Hudson Falls and Fort Edward. When construction of the complex was completed in 1994, most of the administrative offices were moved from the original county seat of Hudson Falls to this location. The town of Fort Edward is part of the Glens Falls Metropolitan Statistical Area.

The town contains a village also named Fort Edward. Both are located on the western border of the county.

The town is located at the "Great Carrying Place," a portage around the falls on the Hudson, which had been used by Native Americans for thousands of years before European colonization. It was located on the Native American "Great War Path," later used by French and English colonists during their own warfare, during the colonial years, especially during the eighteenth century.

During the French and Indian War (1754-1763), General Phineas Lyman constructed Fort Lyman here in 1755. It was renamed Fort Edward in 1756 by Sir William Johnson, the British Superintendent for Indian Affairs in the region, in honor of Prince Edward, the grandson of King George II. Edward was a younger brother of the later King George III.

The west town line is defined by the Hudson River and is the border of Saratoga County, New York. 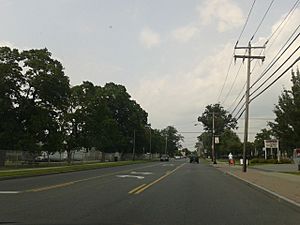 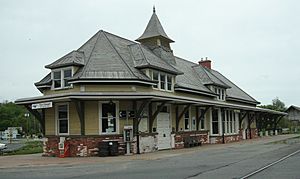 All content from Kiddle encyclopedia articles (including the article images and facts) can be freely used under Attribution-ShareAlike license, unless stated otherwise. Cite this article:
Fort Edward (town), New York Facts for Kids. Kiddle Encyclopedia.