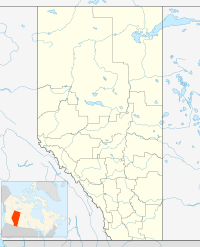 Springbank
Location of Springbank in Alberta

Springbank is a rural community in southern Alberta in Rocky View County. It is located immediately west of the City of Calgary, east of Highway 22, south of the Bow River and north of the rural community of Elbow Valley. Both the Trans-Canada Highway and Lower Springbank Road (north of Highway 8) connect Springbank to Calgary.

Springbank consists mostly of country residential acreages developed with estate homes and features the Springbank Airport. The adjacent rural communities of Bearspaw to the north, across the Bow River, and Elbow Valley to the south, across the Elbow River, also consist mostly of country residential acreages. The urban community of Harmony is adjacent to the Springbank Airport to the west.

Eastern portions of Springbank have been annexed by Calgary since the early 1980s. These portions are now developed with the Calgary neighbourhoods of Springbank Hill, Aspen Woods, West Springs, Cougar Ridge, Crestmont and Valley Ridge.

Springbank is named after Springbank Creek which flows southeast into the Elbow River. The descriptive name for this creek was first applied to the municipal district in 1918 (MD of Springbank). It was first given as a school district name on July 11, 1887 because of the numerous springs breaking out of the sides of the lesser coulees all over the district. Most of the early settlers located near the springs.

Harmony is a planned residential community of approximately 707 ha (1,750 acres) adjacent to the Springbank Airport that received planning approval through the adoption of a conceptual scheme by Rocky View County in February 2007, with a neighbourhood plan for the first stage of Harmony subsequently approved in October 2008. Harmony is planned to have 3,500 residential dwelling units at full build-out, which could accommodate approximately 10,000 residents. Residential built forms in the community will include single detached, semi-detached, townhouse and apartment dwellings. Other planned land uses in the community include commercial retail, business park and schools, as well as open space features such as a regional park, playfields, greenbelts, a golf course and a recreational lake. In mid-2012, it was anticipated that it would take 15 years to build out the community.

Although the future community received prior planning approvals in 2007 and 2008, the application for the first stage of subdivision in 2012 still met with local resistance. Concerns were expressed by the Springbank Airport Business and Pilots Association over the long-term incompatibility of the community with the pre-existing airport. Concerns included safety as well as speculation that future residents would complain about the noise associated with the airport's operations. Other local stakeholders expressed concerns about the impacts Harmony would have on the existing rural community and the loss of farmland. Rocky View County Council approved the subdivision application for the first stage of the community in early July 2012.

The Springbank Airport is located within Springbank. It was the 12th busiest airport in Canada in 2011 in terms of total aircraft movements.

Schools located in Springbank, operated by Rocky View Schools, include:

The high school is located within the Springbank Park For All Seasons, which also includes an ice arena and a curling rink.

Private schools in the area are Webber Academy, Rundle College, and Edge School for Athletes.

All content from Kiddle encyclopedia articles (including the article images and facts) can be freely used under Attribution-ShareAlike license, unless stated otherwise. Cite this article:
Springbank, Alberta Facts for Kids. Kiddle Encyclopedia.