Squiddly Diddly is an anthropomorphic animated octopus created by Hanna-Barbera, who was featured in his own cartoon segment on The Atom Ant/Secret Squirrel Show beginning in 1965.

The round-headed, sailor-hatted Squiddly (who resembles an octopus—albeit with only six tentacles—rather than a squid) is kept captive in an aquatic park known as Bubbleland and resides in a pool with his name on it. Squiddly Diddly is an aspiring musician who makes many attempts to escape and attain musical stardom, but he is constantly foiled by Bubbleland's administrator Chief Winchley. In some episodes, Squiddly Diddly manages to escape, but chooses to return to Bubbleland after finding the outside world to be too harsh. Other times Squiddly and Chief Winchley would have to work together to solve problems in Bubbleland. The cartoons show people applauding Squiddly Diddly's musical talents, but often depict terrified people who mistakenly believed that octopuses are hostile.

On November 3, 2015, Warner Archive released The Secret Squirrel Show: The Complete Series on DVD in region 1 as part of their Hanna–Barbera Classics Collection. This release contains all the Squiddly Diddly shorts.

The episode "Way Out Squiddly" is also available on the DVD Saturday Morning Cartoons Vol. 1.

Squiddly Diddly in other languages 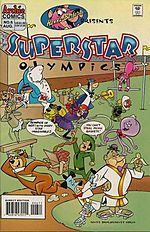 All content from Kiddle encyclopedia articles (including the article images and facts) can be freely used under Attribution-ShareAlike license, unless stated otherwise. Cite this article:
Squiddly Diddly Facts for Kids. Kiddle Encyclopedia.