St. Augustine Catholic Church of New Orleans is in the Archdiocese of New Orleans. The parish was founded in 1841 under the episcopacy of Bishop Antoine Blanc, who later served as New Orleans' first Archbishop. Established by free people of color, who also bought pews for slaves, this is the oldest African-American Catholic parish in the nation. It was one of the first 26 sites designated on the state's Louisiana African American Heritage Trail.

The property on which St. Augustine stands was once part of the Claude Tremé plantation. It is now one of two Catholic parishes in the Faubourg Tremé. The church is located on Saint Claude Avenue at Governor Nicholls Street, a few blocks from North Rampart Street and the French Quarter. It was designed by the French architect J. N. B. de Pouilly, who worked on the expansion and renovation of the more famous St. Louis Cathedral on Jackson Square.

When free people of color organized in the 1830s and received permission from Bishop Antoine Blanc to build a church, the Ursuline Sisters donated the property, on the condition that the church be named St. Augustine, after one of their patron saints, Augustine of Hippo. The church was dedicated on October 9, 1842. At a time when there were pew fees, free people of color paid for extra pews so that enslaved blacks could also attend.

A few months before the October 9, 1842 dedication of St. Augustine Church, the people of color began to purchase pews for their families to sit. Upon hearing of this, white people in the area started a campaign to buy more pews than the colored folks. Thus, The War of the Pews began and was ultimately won by the free people of color who bought three pews to every one purchased by the whites. In an unprecedented social, political and religious move, the colored members also bought all the pews of both side aisles. They gave those pews to the slaves as their exclusive place of worship, a first in the history of slavery in the United States. This mix of the pews resulted in the most integrated congregation in the entire country: one large row of free people of color, one large row of whites with a smattering of ethnics, and two outer aisles of slaves.

The Tremé has traditionally been an African-American neighborhood, although it has included a multicultural community. Along with the neighboring parish of St. Peter Claver, the parish is known in New Orleans for its association with the black Catholic community. The church hosts an annual Jazz Mass, held in conjunction with the Satchmo Festival, which honors Louis Armstrong's birthday; they also have a weekly Gospel Jazz Mass on Sundays. Both tend to attract tourists from around the world.

The interior of the church is historically notable. The pews are the originals and therefore date back to the mid-nineteenth century, although they were re-arranged by long-time pastor Father Jerome LeDoux so that they all faced the celebrant. The main altar is centuries old, consisting of pink Italian marble. The altar is beneath a skylight in shaped to be the "eye of God", an Egyptian symbol. The Stations of the Cross consists of ten oil paintings. Then ten stained glass windows in the church are from France and show five male saints on one side and five female saints on the other side. While the church has modern electronic bells, it also has three bells cast in 1883 for use in the 1884 World Cotton Centennial. The bells were purchased by St. Augustine Church in 1894. 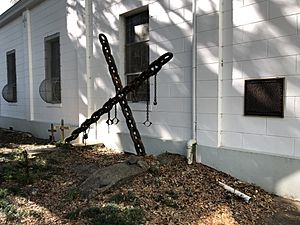 Tomb of the Unknown Slave

The Tomb of the Unknown Slave is located in a garden plot on the property of St. Augustine Church and is a monument to the many nameless or forgotten slaves that died before emancipation. The monument consists of large chains in the shape of a cross with small chains at the base. The parishioners that designed the monument selected this location since it is the site of the Tremé Plantation House where many slaves lived in centuries passed.

Because of substantial property losses in the city after Hurricane Katrina and a decline in population, the diocese decided to close St. Augustine Church, despite the fact that it had been providing extensive community support. Parishioners asked hurricane relief volunteers for help in a protest. They barricaded themselves in the church's rectory to demonstrate against closure. After two weeks, parishioners and church officials agreed on a compromise. The Catholic church had a plan to close churches in 2006, but it chose not to close St. Augustine.

The church was allowed to remain open after presenting a plan of action to address critical areas, including congregational growth, fund raising, and management improvements. The archdiocese would review its status after 18 months. A documentary film about the protest entitled Shake the Devil Off increased publicity for the church's efforts to survive.

In May 2008 St. Augustine Church received a $75,000 grant from the National Trust for Historic Preservation and American Express to aid in needed renovations to the historic parish hall, a center of community services. Enhanced use of the parish hall for community services was integral to the church's plans for the future. In March 2009, St. Augustine Church announced that due to its progress, the archdiocese had decided it would not be closed and had taken the church off probation.

All content from Kiddle encyclopedia articles (including the article images and facts) can be freely used under Attribution-ShareAlike license, unless stated otherwise. Cite this article:
St. Augustine Church (New Orleans) Facts for Kids. Kiddle Encyclopedia.