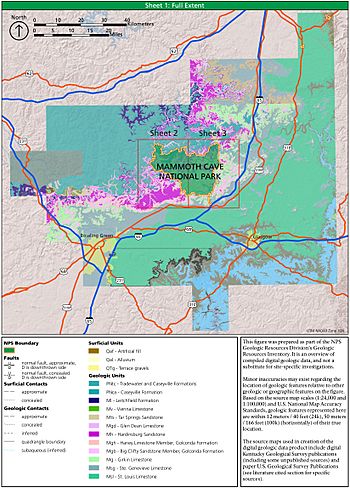 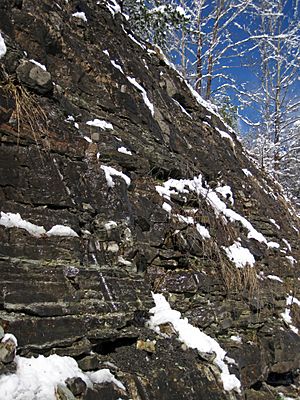 Outcrops of the St. Louis Limestone near Frenchburg, Kentucky

The St. Louis Limestone is a large geologic formation covering a wide area of the midwest of the United States. It is named after an exposure at St. Louis, Missouri. It consists of sedimentary limestone with scattered chert beds, including the heavily chertified Lost River Chert Bed in the Horse Cave Member. It is exposed at the surface through western Kentucky and Middle Tennessee, including the city of Clarksville, Tennessee. The limestone deposit is Mississippian in age, in the Meramecian series, roughly 330-340 million years old.

All content from Kiddle encyclopedia articles (including the article images and facts) can be freely used under Attribution-ShareAlike license, unless stated otherwise. Cite this article:
St. Louis Limestone Facts for Kids. Kiddle Encyclopedia.