Frenchburg is a home rule-class city in Menifee County, Kentucky, in the United States. The population was 486 at the 2010 census. It is the seat and only incorporated city in its rural county. It is located at the junction of U.S. Route 460 and Kentucky Route 36. Logging is the primary industry.

Frenchburg is part of the Mount Sterling Micropolitan Statistical Area.

Frenchburg was laid out in 1869 to be the county seat of newly formed Menifee County and was named for Robert French, a local lawyer and judge. It was formally incorporated by the state assembly in 1871.

Frenchburg was nearly destroyed on June 27, 1882, when Beaver Creek flooded, sweeping away all but three buildings and killing six people.

The area was served by the Foothills Courier newspaper from June 1996 until January 2007. The newspaper was a private, non-affiliated publication, supported by local individuals and businesses. The business failed to financially sustain itself after the death of its editor on October 18, 2006. The Foothills Courier was bought out shortly thereafter by the Menifee County News, an affiliated publication from Carlisle, Kentucky.

According to the United States Census Bureau, the city has a total area of 1.0 square mile (2.6 km2), all land.

The climate in this area is characterized by relatively high temperatures and evenly distributed precipitation throughout the year. The Köppen Climate Classification subtype for this climate is "Cfa" (Humid Subtropical Climate). 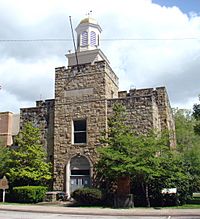 There were 245 households out of which 32.2% had children under the age of 18 living with them, 48.6% were married couples living together, 19.6% had a female householder with no husband present, and 28.6% were non-families. 26.9% of all households were made up of individuals and 13.5% had someone living alone who was 65 years of age or older. The average household size was 2.25 and the average family size was 2.66.

All content from Kiddle encyclopedia articles (including the article images and facts) can be freely used under Attribution-ShareAlike license, unless stated otherwise. Cite this article:
Frenchburg, Kentucky Facts for Kids. Kiddle Encyclopedia.