Saint Meinrad Archabbey is a Roman Catholic monastery in Spencer County, Indiana, USA, was founded by monks from Einsiedeln Abbey in Switzerland on March 21, 1854, and is home to approximately 79 monks. The abbey is named for the monk St. Meinrad of Einsiedeln, who died in 861. It is one of only two archabbeys in the United States and one of 11 in the world. The abbey is located approximately 15 minutes from Monastery Immaculate Conception in Ferdinand, Indiana. Immaculate Conception is for Benedictine women. Because of the presence of the Archabbey, Harrison Township is located within the Archdiocese of Indianapolis instead the Diocese of Evansville, like the rest of Spencer County.

The Benedictine community at Saint Meinrad consists of men who dedicate their lives to prayer and work. They gather in community five times a day—for morning prayer, Mass, noon prayer, evening prayer and compline—to pray for the Church and the world. Guests often join the monks in prayer in the Archabbey Church.

In addition, the monks spend private time reading spiritual and religious materials. They live under the Rule of St. Benedict, the 6th-century instructions for community living written by St. Benedict. 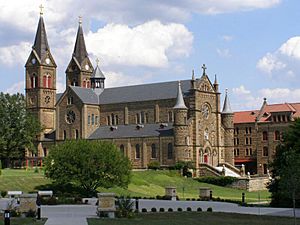 The monks came to southern Indiana at the request of a local priest (Fr. Joseph Kundek) for assistance in addressing the pastoral needs of the growing German-speaking Catholic population and to prepare local men to be priests. St. Meinrad became an abbey in 1870, with Martin Marty as abbot and Fintan Mundwiler as prior. Saint Meinrad now operates a graduate school of theology and has more than a score of its monks in parish work, chaplaincies, and diocesan assignments.

Shortly after arriving in Indiana, the Benedictines began offering high school courses to local youths. In 1861, the monks expanded their general courses to include undergraduate courses in philosophy and theology. Through these programs, the monks of Saint Meinrad began their mission, which continues today: preparing men for service in the Church as priests. The undergraduate degree program, St. Meinrad College, closed in 1998, despite the fact that it began admitting men who were not seeking the priesthood, and had considered admitting women.

In 1877, the Abbot of Saint Meinrad Abbey, Martin Marty, negotiated with an agent of the LR&FS Railroad Company, for land to establish a Benedictine monastery in northern Arkansas. The Subiaco Abbey and Academy was founded on March 15, 1878, upon the arrival of three monk-missionaries from Saint Meinrad Abbey.

In 1889, a group of monks left from St. Meinrad Abbey to travel to the Archdiocese of New Orleans. They came with an invitation from the Archbishop there to found a college seminary to train local vocations. The monks founded Saint Joseph Abbey, located in Saint Benedict, near Covington, Louisiana, north of New Orleans. Saint Joseph Abbey operates Saint Joseph Seminary College, and a number of other ministries around the Diocese.

In 1933, Saint Meinrad founded Marmion Abbey in Aurora, IL and in 1950 Blue Cloud Abbey near Marvin, South Dakota. Then, in 1958, the monks of Saint Meinrad founded Prince of Peace Abbey in Oceanside, CA. Blue Cloud Abbey was founded in order to serve the local Native American population. Due to declining numbers and an aging population, Blue Cloud was closed by its remaining members in 2012. Prince of Peace and Marmion abbeys continue to operate.

In 1954 St. Meinrad Abbey was elevated to Archabbey by the Holy See. 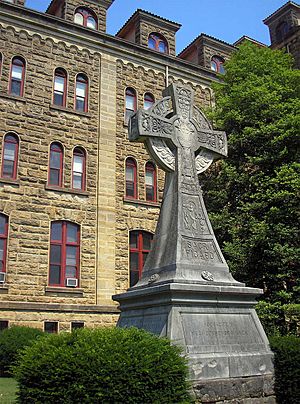 A Celtic cross in front of the School of Theology

Seminary and School of Theology

The Seminary and School of Theology offers graduate-level degrees in theology. Priesthood candidates work toward a Master of Divinity. Lay degree students can earn a Master of Arts (Theology) or a Master of Arts (Pastoral Theology). A two-year pre-theology program leads to a Master of Catholic Philosophical Studies.

Saint Meinrad began offering lay degree programs in 1969, although students worked on their degrees during the six-week Summer Session program. In the fall of 1993, the Seminary and School of Theology expanded its mission to allow lay ministry students to attend classes during any of the academic terms. While some classes specifically aimed at ordination preparation are reserved for M.Div. students, lay ministers sometimes pursue their graduate degrees as part-time or full-time students. More than 5,000 men and women have studied in the School of Theology.

Other programs in the Seminary and School of Theology include a permanent deacon formation program, which assists Catholic dioceses in the formation of their deacon candidates, and a youth and vocations program, which encourages high school and college students to participate more deeply in the Church's liturgy and consider a vocation of service to the Church.

The Seminary and School of Theology also houses the Institute for Priests and Presbyterates, which offers continuing formation for priests making the transition from seminary to parish life, priests preparing for their first assignment as pastor, and presbyterates - which is the group of priests and their bishop in a Catholic diocese.

In 1995, there was a controversy over the firing of a theologian, Carmel McEnroy, who taught at the school. In the spring of 1994, Pope John Paul II had issued an Apostolic Letter declaring the issue of the ordination of women as priests resolved and no longer open to debate. Several months after the statement was issued, Dr. McEnroy joined 1,500 others in signing an open letter opposing the Pope's teachings on the subject. After reading the open letter in the National Catholic Reporter, the Archabbot determined that Dr. McEnroy must be removed from the faculty at Saint Meinrad for publicly dissenting from the Pope's teachings. Dr. McEnroy sued on a claim of breach of contract. The lower court dismissed the case, citing lack of jurisdiction, which decision was upheld on appeal.

Saint Meinrad Archabbey owned and operated an international company that produced and marketed religious, spiritual and inspirational cards, books and gifts. At one time, Abbey Press was one of the largest business enterprises in Spencer County, Indiana, with more than 100 employees.

The press was founded in 1867 when the Benedictine monks purchased a used printing press. Abbey Press marketed its products throughout the United States and in 25 English-speaking countries. More than 20 foreign companies are licensed to print some of Abbey Press' publications in native languages. Net proceeds from the sales of Abbey Press products support the good work and ministries of Saint Meinrad Archabbey. As of June 30, 2017, Abbey Press closed and the printing presses and other equipment were sold. Just over 70 people lost their jobs.

All content from Kiddle encyclopedia articles (including the article images and facts) can be freely used under Attribution-ShareAlike license, unless stated otherwise. Cite this article:
St. Meinrad Archabbey Facts for Kids. Kiddle Encyclopedia.