St. Thomas Manor (1741) is a historic home and Catholic church complex located near Port Tobacco, Charles County, Maryland. It is now known as St. Ignatius Church and Cemetery. The manor house complex is recognized as the oldest Jesuit residence in the world to have been continuously occupied by that order. The mission settlement of Chapel Point was started in 1641 by Father Andrew White, S.J., an English Jesuit missionary. He administered to the Potapoco Native Americans, some of whom he converted to Catholicism. Established in 1662, this is the oldest continuously active Roman Catholic parish in the Thirteen Colonies of North America founded by Great Britain. With the consecration in 1794 of Bishop John Carroll, St. Thomas became the first Roman Catholic see in the United States.

The house is a two-story, seven-bay, brick structure of Georgian architecture, of Flemish bond construction. The mansion is the oldest surviving example of the Georgian style in Maryland. The manor house was built in 1741 as the headquarters of the Maryland Mission of the Society of Jesus, replacing an earlier structure. It served as the Superior's and later the Provincial's official residence. This house was also the nucleus of other missions in Maryland and the mid-Atlantic region.

Connected to the manor house stands a two-story brick wing that incorporates a former chapel built in 1798, now called St. Ignatius Church. Outbuildings are also significant, including a small, mid-19th century wood-frame slaves' quarter, "one of remarkably few such buildings to survive in this area." In addition, the former corn crib is the "largest structure of its type recorded in Charles County, and one that exhibits many construction features not represented elsewhere." 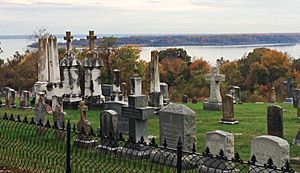 A cemetery lies to the west of the manor house and church. Notable parishioners are buried there, including a Confederate agent, Olivia Floyd, and US Congressmen, Sydney Emanuel Mudd, William M Digges, and Sydney Emanuel Mudd II.

St. Thomas Manor was listed on the National Register of Historic Places in 1988. Due to its history and scenic waterfront setting, the manor grounds, church and cemetery attract visitors from distant places. They make up a favorite rest-stop for many bicycle tour groups.

In 1794 it was at St. Thomas Manor that John Carroll was invested in his robes as the first Catholic bishop of the United States of America, after the nation gained independence in the Revolutionary War. (He later traveled to London for official consecration as a bishop by the Vicar Apostolic.) This investiture established St. Thomas as the first Roman Catholic see in the United States.

The St. Thomas complex was also the site of the revival of the Jesuit order in the United States in 1805, after it had been suppressed by the Catholic Church in 1773. Three American priests took their vows at St. Ignatius Church.

The Jesuits of the Maryland Province who resided at St. Thomas Manor sold several members of the Georgetown 272 in 1838. In a letter, William McSherry, S.J. estimated that the sale of the enslaved persons would amount to approximately $16,000. The money from this sale went to repay the debts of the struggling Georgetown College (now Georgetown University) in Washington, D.C. The Maryland Province Jesuits opposed the slave trade, but not slavery in practice. Because of this, they frequently sold enslaved individuals in order to repay debts and raise money to support the Jesuit Missions and Georgetown College.

During the years of slavery and after the American Civil War, when most southern governments classified people as only black or white in a binary system related to the racial caste of slavery, St. Ignatius was among the Catholic parishes that continued to record their Native congregational members as Indian, regardless of whether they were of mixed race. In colonial and United States records, by contrast, the tribal identities of some Native Americans were lost when they were classified by outsiders as free people of color, "colored," or "white," regardless of how they identified ethnically. Research in Catholic records has helped some tribes document their continuous cultural history and identification as Native American, and to gain state and federal recognition as tribes since the late 20th century.

All content from Kiddle encyclopedia articles (including the article images and facts) can be freely used under Attribution-ShareAlike license, unless stated otherwise. Cite this article:
St. Thomas Manor Facts for Kids. Kiddle Encyclopedia.