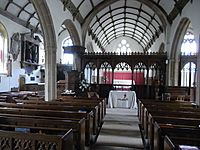 The Church of St Decuman in Watchet, Somerset, England has a 13th-century chancel with the rest of the church being from the 15th century. It has been designated as a Grade I listed building.

The dedication is because Watchet is believed to be the place where Saint Decuman was killed.

The church stands on a prominent site overlooking the town. It was restored and reseated by James Piers St Aubyn in 1886–1891, with further internal alterations being made in 1896 when the Caen stone reredos was erected. 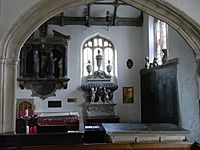 View northwards from the chancel into the Wyndham Chapel 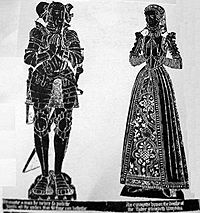 The Wyndham Chapel occupies the east end of the north aisle and is dedicated to the Wyndham family of nearby Orchard Wyndham House, former lords of the manor. Included is a memorial to Sir John Wyndham (1558 – 1645), who played an important role in the establishment of defence organisation in the West Country against the threat of the Spanish Armada. Next to his monument is one to his parents, and the chest tomb of his grandparents, with monumental brasses, serves to separate the chapel from the chancel. A mural monument exists with kneeling effigies of two of Sir John's sons, Henry and George, as well as other monuments to the later family of Wyndham.

In the churchyard is the remains of a 15th-century stone cross.

All content from Kiddle encyclopedia articles (including the article images and facts) can be freely used under Attribution-ShareAlike license, unless stated otherwise. Cite this article:
St Decuman's Church, Watchet Facts for Kids. Kiddle Encyclopedia.