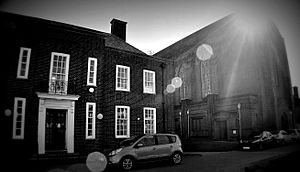 St Elisabeth's Church is a church in the Old Town area of Eastbourne, England. It was built in 1938 to the designs of local architects Stonham & Sons and Fenning. The church hall is a good example of the architecture of the period. St E's, as it is affectionately referred to, is an Anglican church within the Diocese of Chichester.

The original derelict church building, which is set for demolition in 2019 and 2020, once contained chancel paintings by the art historian and conservator, Ernest William Tristram (1882-1952). Now housed in the new domed church building next door, the Tristram Panels depict the life of John the Baptist and his parents, the priest Zacharias and his wife Elizabeth. (Tristram also painted a limited number of original works, including the panels at St Elisabeth's and paintings at York Minster and St Fin Barre's Cathedral in Cork City). In addition, St Elisabeth's crypt contained a series of large wall paintings by the artist Hans Feibusch (1898-1998). Through this work he came to the attention of Charles Herbert Reilly, professor of architecture, and George Bell who provided Feinbusch with the opportunity to create a mural of his own design at St Elisabeth's in 1944. Feibusch chose the allegory of Pilgrim's Progress as a vehicle for his own story as a refugee fleeing Nazi Germany and his eventual acceptance in 1940s Britain. Feibusch enlisted the help of local people to complete the mural, which is now a registered War Memorial dedicated to civilian casualties of war. 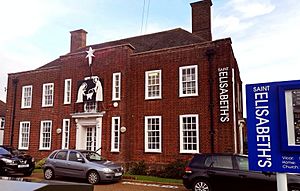 All content from Kiddle encyclopedia articles (including the article images and facts) can be freely used under Attribution-ShareAlike license, unless stated otherwise. Cite this article:
St Elisabeth's Church, Eastbourne Facts for Kids. Kiddle Encyclopedia.