St John the Evangelist's Church, Oulton, West Yorkshire, England is an active Anglican parish church in the archdeaconry of Leeds and the Diocese of Leeds.

Built between 1827 and 1829 the church is of and Early English style and built of sandstone ashlar with a slate roof. The church has a west three stage tower with octagonal spire and flying buttresses. The nave and porch are to the north while the hexagonal vestry is to the South.

The church has two centred arches with three orders of moulding. The ceiling is groin-vaulted with carved bosses. The church organ is on the west end. There is a wall monument to the church's founder John Blayds who died the year ground broke. 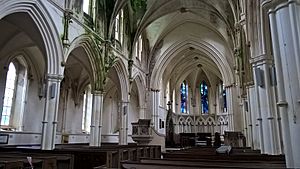 In November 2014, a large quantity of lead was stolen from the roof resulting in flooding that caused considerable damage and put the church out of use. However, funding is being sought to repair the damage.

All content from Kiddle encyclopedia articles (including the article images and facts) can be freely used under Attribution-ShareAlike license, unless stated otherwise. Cite this article:
St John the Evangelist's Church, Oulton Facts for Kids. Kiddle Encyclopedia.