St Martin in the Bull Ring facts for kids

The church is a Grade II* listed building. The current rector is Jeremy Allcock.

The present Victorian church was built on the site of a 13th-century predecessor, which was documented in 1263. The church was enlarged in medieval times and the resulting structure consisted of a lofty nave and chancel, north and south aisles and a northwest tower with spire.

In 1547, although no record is kept to indicate when the first clock appears in Birmingham, during this year the King's Commissioners report that the Guild of the Holy Cross are responsible "ffor keeping the Clocke and the Chyme" at a cost of four shillings and four pence a year at St Martin's Church. The next recorded mention of a clock is in 1613. The earliest known clock makers in the town arrived in 1667 from London.

In 1690, the churchwardens "dressed the church in brick". All was cased in brick with the exception of the spire.

John Cheshire rebuilt 40 feet of the spire in 1781, which was strengthened by an iron spindle running up its centre for a length of 105 feet. It was secured to the sidewalls at every ten feet by braces. In 1801, several metres from the top of the spire were replaced after they were found to have decayed. The tops of the four pinnacles surrounding the main spire were also rebuilt. By 1808, the spire had been struck by lightning three times.

In 1853, the brick casing was removed from the tower by Philip Charles Hardwick, who added the open-air pulpit. The church also contained an organ, the reedwork of which had been done by John Snetzler. However, the pipes were found to be ineffective due to their proximity to the church roof and walls.

In 1873, the church was demolished and rebuilt by architect J. A. Chatwin, preserving the earlier tower and spire. During the demolition, medieval wall paintings and decorations were discovered in the chancel, including one showing the charity of St Martin dividing his cloak with a beggar. Two painted beams were also found behind the plaster ceiling.

The exterior is built of rockfaced Grimshill stone. The interior is of sandstone with an open timber roof, which shows the influence of the great hammerbeam roof of Westminster Hall. The beams are decorated with fine tracery and end in large carvings of angels. The roof weights 93 tons (94.5 tonnes), spans 22 ft (6.7m) over the 100 ft (30.4m) long nave and is 60 ft (18.2m) high.

The Victorian floor tiles are by Minton and display the quartered arms of the de Bermingham family.

The South Transept has a Burne-Jones window, made by William Morris in 1875. This window was taken down for safe keeping the day before a World War II bomb dropped beside the church on 10 April 1941, destroying all remaining windows. The West window is a 1954 copy of the Henry Hardman 1875 window destroyed in the Blitz.

As part of the Bull Ring development in 2003 the church was cleaned and repaired.

The parish of St Martin’s was extensive, covering a large portion of modern Birmingham. As new churches were constructed, parts of the parish were re-assigned as follows:

There were four bells in 1552, together with a clock and chime. Six bells were put up in 1682. It is known that in 1745 when John Wesley preached in the Bull Ring the bells were rung in an attempt to drown his voice.

In July 1758 the eight bells were replaced by a new peal of ten, tenor weight 35 long cwt (1778 kg), cast by the Whitechapel Bell Foundry. These were subsequently augmented to twelve in 1772.

The first broadcast of church bells change ringing was of St Martin's. This was broadcast before a Sunday evening service in May 1924. The bells were recast in 1928 and an additional semitone bell was added in 1953. The frame in which the bells were rehung dated from 1869 and trouble with the frame led to a scheme of total renovation in 1991.

A new peal of sixteen bells (tenor weight 39 long cwt 1 qr 19 lb (4,415 lb or 2,003 kg)) hung for ringing was installed, being the first time more than twelve bells had been installed as a change ringing instrument. Sixteen is an unusual number, five, six, eight, ten or at the most twelve would be typical: in 2008 only three rings of sixteen exist in the world. 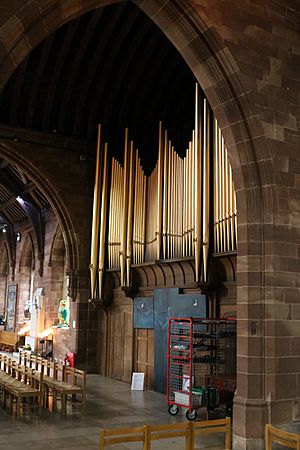 The organ screen in the north transept

The Guild of the Holy Cross at St. Martin's Church provided for an organist before the Reformation.

The church was presumably without an organ from the English Civil War as the churchwardens accounts read:

We the Minister, Churchwardens and inhabitants within the Parish of St. Martin's Birmingham being desirous to put up an organ in the said Parish Church have at a vestry called for this purpose unanimously agreed to raise the sum of 300l and upwards for competing the same, and for our selves, and in behalf of the rest of the Parishioneres have hereunto sett our hands this 17th day of May Anno Dom 1725.

In 1822 a new organ was installed by Thomas Elliot The organ was extended in 1855 by William Hill who provided pedal pipes of 2 octaves and 2 notes. He also revoiced the reeds and open diapason in the swell, and extended the swell organ to tenor c, enclosing it in a new Venetian swell-box. This organ was rebuilt by John Banfield & Son in 1875 and renovated and enlarged to 3 manuals and 40 stops by Banfield in 1883. In 1906 this was sold to St John's Church, Deritend.

The current pipe organ is by Harrison & Harrison and dates from 1906. Originally it was a three manual instrument on the north side of the chancel but in 1955 it was re-built as a four manual organ and moved to the north transept by John Compton. The opening recital was given by George Thalben-Ball on 30 March 1955. The specification of the organ can be found at the National Pipe Organ Register.

Since around 2004, St Martin's has abandoned the use of the organ for the Sunday 11.00am Service (now called The Crossing service; a Music in Worship Group leads the Service). It is still played at the Sunday 9.30am Holy Communion and for 6.00pm Choral Services.

All content from Kiddle encyclopedia articles (including the article images and facts) can be freely used under Attribution-ShareAlike license, unless stated otherwise. Cite this article:
St Martin in the Bull Ring Facts for Kids. Kiddle Encyclopedia.