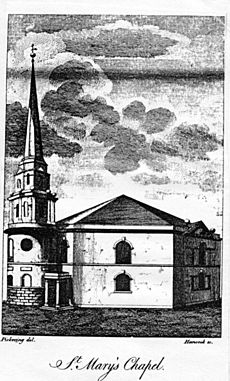 St. Mary's Church, Whittall Street, was built in 1774, under an Act of 1772, as a chapel of ease to St Martin in the Bull Ring. The building was designed by Joseph Pickford. Two years after opening, part of a gallery collapsed during a service, but the incident did not result in any injuries.

In 1786 John Wesley attended a service and heard a sermon by the first incumbent Edward Burn.

A parish was assigned to St. Mary's in 1841 out of St Martin in the Bull Ring. 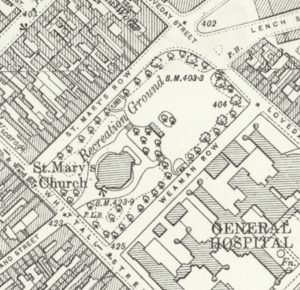 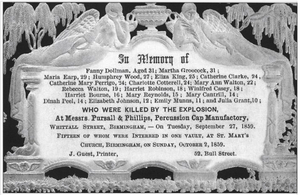 In 1859, 15 women (of a total of 19), who had died in an explosion at Messrs Pursall and Philips Percussion Cap Manufactory, also in Whittall Street, were interred in a single vault in the church.

Structural problems were discovered in 1866 and the tower and spire were subsequently rebuilt in a Gothic style.

In 1925 the church was closed pending demolition for the expansion of Birmingham General Hospital. The parish was united with that of Bishop Ryder Church. The proceeds of the sale went to build St Mary's Church, at Pype Hayes.

Its registers of baptisms (1774–1812) and burials (1779–1812) are at St. Martin's. Its silver communion service is at St. Mary's, except for two flagons which are in the collection of Birmingham Assay Office.

The thoroughfare at the north-west side of the site is still called St Mary's Row.

All content from Kiddle encyclopedia articles (including the article images and facts) can be freely used under Attribution-ShareAlike license, unless stated otherwise. Cite this article:
St Mary's Church, Whittall Street, Birmingham Facts for Kids. Kiddle Encyclopedia.