St Mary the Virgin's Church is in the village of Bottesford, Leicestershire, England. It is an active Anglican parish church in the deanery of Framland, the archdeaconry of Leicester and the diocese of Leicester. Its benefice is united with those of eight local parishes. The church is recorded in the National Heritage List for England as a designated Grade I listed building. 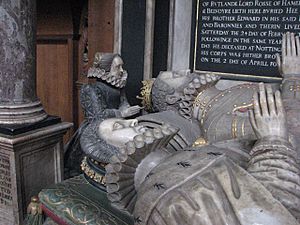 Monument by Johnson to the John Manners, 4th Earl of Rutland, d. 1588

Sometimes known as the "Lady of the Vale", it is a large church which has the 2nd highest spire in Leicestershire (at 212 feet). The oldest part of the church dates from the 12th century, with additions and alterations made during the following three centuries, including the nave and spire in the 15th century. The chancel was rebuilt in the 17th century to accommodate the monuments of the Manners family, earls (later dukes) of Rutland, which completely fill it. The monuments include work by Caius Gabriel Cibber and Gerard Johnson the elder. One of the Rutland tombs is famous for its inscription, which attributes a death to witchcraft by the Witches of Belvoir.

A number of restorations were carried out during the 19th century. The restoration in 1847–48 was carried out by the Lancaster partnership of Sharpe and Paley. This involved restoring the nave, aisles, and transepts, replacing the seating and the roofs of the aisles, removing the gallery, inserting the tower screen, adding new pinnacles, reflooring the church and replacing windows. This cost £2,235 (equivalent to £170,000 in 2018),2018 towards which the Duke of Rutland gave £600, the Revd F. J. Norman gave £550, and a grant of £110 was received from the Incorporated Church Building Society.

All content from Kiddle encyclopedia articles (including the article images and facts) can be freely used under Attribution-ShareAlike license, unless stated otherwise. Cite this article:
St Mary the Virgin's Church, Bottesford Facts for Kids. Kiddle Encyclopedia.