The church of St Mary the Virgin is an Anglican parish church in the village of Hanbury, Worcestershire. Its earliest parts date from about 1210 and it is a Grade I listed building. The church was the family church for the Vernon family of nearby Hanbury Hall. 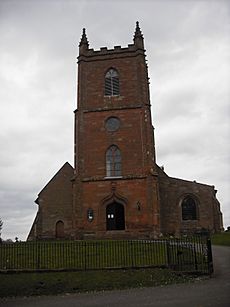 St Mary the Virgin, Hanbury - from the south

The church, in the Early English and Georgian styles, is of part-dressed, coursed sandstone rubble and part sandstone ashlar, with slate and plain tiled roofs with parapets at the gable ends.

There is a tower at the west, which was rebuilt in 1793, with three stages, three strings and a chamfered plinth. It has diagonal corner buttresses and pointed-arched cusped panels. The lowest stage of the tower serves as a porch and west entrance. It has a heavily moulded ogee-arched and tall finialed surround. There is a large oculus in the side elevation and north pointed doorway. The second stage of the tower has pointed Y-traceried windows with sill string and an oculus above. The belfry stage has similar windows with louvred openings and above is a panelled frieze and embattled parapet with crocketted corner pinnacles which was restored in the mid-20th century.

The nave is from the 13th century and the north aisle from the 14th century. Both aisles were rebuilt in the late 18th century. The north aisle has a separate roof, diagonal corner buttresses and four large raking buttresses. One of the buttresses is marked with an old mass dial. There are two windows with pointed arches, incorporating some 14th-century stonework, but without tracery. The easternmost arch is blocked and there are two square-headed windows. The west end elevation has a blocked pointed doorway.

The south aisle has a single pitch roof, diagonal corner buttresses and also buttresses at the bay divisions. There is a blocked doorway and window to the west and a pointed window, without tracery, in the second bay from the east. The west end elevation has a pointed window reconstructed from 13th century masonry, with a hood mould. In the nave roof there are two flat-roofed dormers.

The chancel, dated from about 1860, is by G. E. Street. There are three bays with buttresses at the gable ends and a three-light east window has a hood mould with foliated stops and continuous sill string. Pointed windows, without tracery, are located at the north-east and south-east ends. The north transept gable end has four cusped lancets beneath a rose window. The vestry projects from its east side elevation and has three cusped lancets, a door facing north and a rose window in its east gable end. The south transept has a parallel east wing. 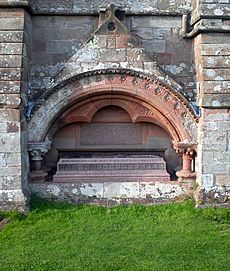 Tomb of Thomas Bowater Vernon, of Hanbury Hall, outside the Vernon Chapel

The vestry and transept house the Vernon Chapel which has a transept gable end and a central pointed doorway with nookshafts and an outer dog-tooth and an inner rosette moulding. Above is a three-light window with hood mould and foliated stops. The adjacent gable end has at its base a gabled monument to Thomas Bowater Vernon (died 1859). Above is a rose window with a hood mould returning to form a string. The east-side elevation has a dog-tooth eaves moulding and a three light window.

In the churchyard, at the edge of the woodland to the north, is the grave of Emma Vernon (1754–1818), who inherited the Hanbury Estate. The churchyard also contains a war grave of a Royal Corps of Signals soldier of World War II.

The south arcade, from about 1210, has circular columns, one still with a trumpet-scalloped capital. The north arcade has octagonal columns and re-used 14th century capitals. The pointed tower arch, of three chamfered orders, is blocked and flanked by semi-circular headed niches. The chancel arch is pointed, has dog-tooth moulding and is supported on short columns with foliated capitals. Similar detailing has been used by Street throughout the chancel.

Throughout the church there are wagon roofs, plastered in the nave and aisles and ornately painted in the chancel and transepts. The chancel has piscina, sedilia and aumbry, above which the continuous east window sill string forms a hood. Some of the wall panelling in the north aisle, and the boxing in the ringing chamber probably re-used woodwork from the 17th century pews. 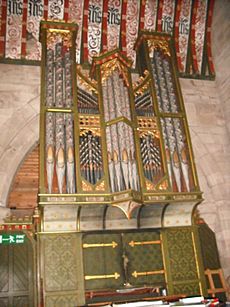 Other fittings include a Last Supper reredos in alabaster, and cast iron altar rails and parcloses. The Vernon Chapel has a 17th-century oak altar table from St Helen's, Worcester. In the north transept is an elaborately painted organ case housing a Nicholson two-manual instrument, built in about 1860, with a broader specification than is common for nearby Nicholson parish church instruments of similar age. The nave has a 19th-century font, an elegant late 18th-century west gallery and some 17th-century panelling. The box pews, which were installed in 1872, are mostly now reduced in height – only those of the Bearcroft family in the north aisle and the Vernon family servants in the south aisle, retain their original height.

In the north aisle are the original artist's models of the Nativity and Resurrection panels for the reredos of Liverpool Cathedral, by Walter Gilbert founder of the Bromsgrove Guild, and Louis Weingartner one of his craftsmen. In the south aisle is an early 16th-century relief and the parish chest. In the tower is a late 18th-century bread dole cupboard and more 17th-century panelling. The musicians' gallery at the west end bears the Royal Coat of Arms of Elizabeth II, carved in 1953 by Celestino Pancheri of the Bromsgrove Guild. The elegant baroque chandelier was gifted by Thomas Parkes in 1795. 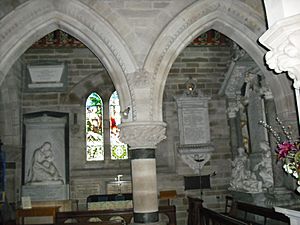 There are numerous memorials including, in the Vernon Chapel, a large monument to Thomas Vernon (died 1721) by Stanton and Horsnaile. It has a semi-reclining effigy flanked by the figures of Justice and Learning and behind this, Corinthian columns supporting an open pediment. There is also a standing monument of Bowater Vernon (died 1835) by Roubiliac, a large marble relief panel by Chantrey to Thomas Taylor Vernon (died 1837) and a late 17th-century memorial to Richard Vernon (died 1678).

In the chancel is a wall memorial to Richard Vernon (died 1627) with two kneeling figures set within a recess. In the nave is a large relief panel to Thomas Vernon (died 1771). The east window of the Vernon Chapel and north transept there is 19th century glass. The Victorian east window has a magnificent array of glazing bars and cost £141. It depicts scenes from the Passion and Resurrection.

There are a number of memorial tablets to members of the Bearcroft family who lived in Hanbury at Mere Hall (now also a Grade I listed building). The family grew in status from 1430 onwards and family ownership of Mere Hall ended only in 1974.

High on the west wall of the North Aisle hangs a Queen Anne Charities Board from 1713. Loaves given by Sir John Hanbury's charity were placed in a dole cupboard with slatted door. This was originally against the south wall of the porch, but is now next to the pulpit.

The peal of eight bells dates from 1678 and is in excellent order. 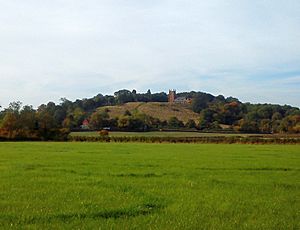 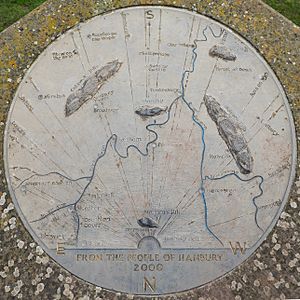 The plate on the toposcope in the churchyard

The church originally dates from the 13th century on an older site. It was altered in the 14th century and was rebuilt in the late 18th by Thomas Johnson of Worcester. As part of the works by Johnson, the old tower with its spirelet, known locally as the "Hanbury Haycock", was removed and replaced with the current bell-tower. The church was restored in about 1860 by George Edmund Street.

The church location, on a hill top, was originally the site of an Iron Age hillfort. In Saxon times there was a monastery which was endowed by Wiglaf king of Mercia in a charter dated AD 836. This charter was signed and sealed by Ceolnoth, Archbishop of Canterbury, Cyneferth, Bishop of Lichfield and Heahbeorht, Bishop of Worcester. The original charter is held by the British Museum, but a 1913 copy hangs in the north aisle of the church.

The original dedication of the church was to St John the Baptist, but this was changed in 1553 to Our Lady the Virgin, presumably to compliment the new Queen Mary Tudor.

Richard Vernon (died 1627), who is commemorated with his wife Frances, in a monument in the sanctuary, was the first Vernon to become Hanbury Rector, a position which remained in the family, almost exclusively, for almost 275 years. One of Vernon's predecessors was Dr Rowland Taylor who gave his life during the Marian persecutions in Hadleigh, Suffolk.

In 200 a toposcope was erected in the churchyard for the benefit of those admiring the view.

The title of Rector ceased in 2008 when a Priest in Charge was appointed to serve the nine parishes of the Bowbrook Group.

Since 2005, Hanbury has hosted BBC Radio 4's Any Questions? and BBC Television's Songs of Praise. The ring of bells has been used in the BBC Radio 4 series The Archers. During the last 60 years the location has been used for numerous film and sound recordings for the series.

All content from Kiddle encyclopedia articles (including the article images and facts) can be freely used under Attribution-ShareAlike license, unless stated otherwise. Cite this article:
St Mary the Virgin, Hanbury Facts for Kids. Kiddle Encyclopedia.