St Michael the Archangel Church is a Roman Catholic parish church in Chatham, Kent, England. It was built from 1862 to 1863 in the Romanesque Revival style, designed by Henry Clutton. In 1935, an extension was built, designed by the Frederick Walters and Son firm. It is situated on Hill's Terrace between Rochester Street and Maidstone Road, next to Chatham railway station. When built, it was the only Catholic church in Medway. 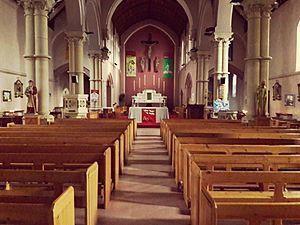 In 1795, the first Catholic mission in Medway was founded in Brompton. It created by a French priest. At first, the chapel was housed on Westcourt Street and later on Manor Street. The mission would remain there until St Michael's Church was built.

The church was built from 1862 to 1863. It was designed by Henry Clutton and the estimated cost was £1,695. When it was built the church became the centre of the Catholic mission in Medway. From the church, priests would go out to say Mass for Catholic congregations in the surrounding area, such as those in Gillingham. In 1881, the pulpit was given to the church by locally garrisoned Catholic soldiers. 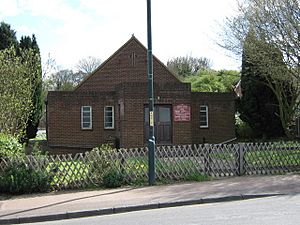 All content from Kiddle encyclopedia articles (including the article images and facts) can be freely used under Attribution-ShareAlike license, unless stated otherwise. Cite this article:
St Michael the Archangel Church, Chatham Facts for Kids. Kiddle Encyclopedia.