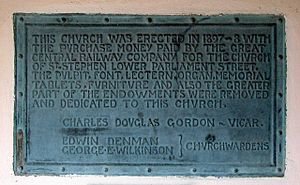 St Stephen’s was the successor church to St Stephen's Church, Bunker's Hill. It was consecrated by George Ridding the Bishop of Southwell in 1898. A mission room and school was designed by Hedley John Price and opened in 1902.

In 1987 it was amalgamated with St Paul's Church, Hyson Green as the joint parish of Hyson Green St Paul’s and St Stephen’s, Nottingham.

All content from Kiddle encyclopedia articles (including the article images and facts) can be freely used under Attribution-ShareAlike license, unless stated otherwise. Cite this article:
St Stephen's Church, Hyson Green Facts for Kids. Kiddle Encyclopedia.