Saint Vedast Foster Lane or Saint Vedast-alias-Foster, a church in Foster Lane, in the City of London, is dedicated to St. Vedast (Foster is an Anglicisation of the name "Vaast", as the saint is known in continental Europe), a French saint whose cult arrived in England through contacts with Augustinian clergy. 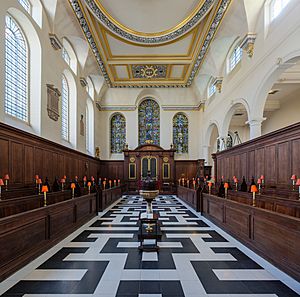 The original church of St Vedast was founded before 1308 and was extensively repaired in the seventeenth century.

Although the church was not completely destroyed in the Great Fire of 1666, it was restored by 1662 on parochial initiative. However, the church required substantial reconstruction by the office of Sir Christopher Wren between 1695 and 1701, with only small parts of the older building surviving to be incorporated, most noticeably parts of the medieval fabric in the south wall which were revealed by cleaning in 1992–3. The three-tier spire, considered one of the most baroque of all the City spires, was added in 1709–12 at a cost of £2958, possibly to the designs of Nicholas Hawksmoor, whose correspondence with the churchwardens survives. The organ was built by Renatus Harris in 1731, originally for St Bartholomew-by-the-Exchange.

Wren's church was gutted a second time by firebombs during the London blitz() of 1940 and 1941. A proposal by Sir Hugh Casson to leave this and several other ruins as a war memorial was not implemented. The post-war restoration within the old walls was undertaken by Stephen Dykes Bower. He re-ordered the interior in a collegiate chapel style with seating down each side with a side chapel in the former South aisle, and squared the old walls which were not rectangular in plan so that the altar now faces the nave squarely. He made an almost imperceptible taper in the pews and floor pattern, to give a false perspective towards the altar, making the church look longer than it is. The architect also designed the richly decorated 17th-century-style plaster ceiling. He reused fittings from other destroyed City churches, including the richly carved pulpit from All Hallows Bread Street and the font and cover from St Anne and St Agnes. Dykes Bower commissioned the Whitefriars glass windows in the East End, showing scenes from the life of St Vedast. These windows are largely opaque to hide tall buildings behind and to disguise the fact that the East wall is a wedge in plan. The work was completed in 1962. An aumbry by the south chapel altar is by Bernard Merry and the organ is 1955 by Noel Mander, in the re-used 1731 Harris case. 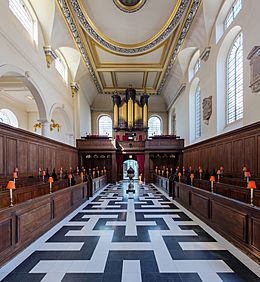 Dykes Bower also built a small Parish Room to the North East of the church in 17th-century style and a Georgian-style rectory, adjacent to the church, on Foster Lane in 1959 – in the first floor room of which is an important mural by Hans Feibusch on the subject of Jacob and the Angel. A niche in the internal courtyard of the building contains a carved stone head by sculptor Jacob Epstein.

The church is noted for its small but lively baroque steeple, its small secluded courtyard, stained glass, and a richly-decorated ceiling. It also has a set of six bells, cast in 1960, that are widely regarded as being the finest sounding six in London.

The church was designated a Grade I listed building on 4 January 1950. The rectory was listed as a Grade II building on 15 July 1998.

All content from Kiddle encyclopedia articles (including the article images and facts) can be freely used under Attribution-ShareAlike license, unless stated otherwise. Cite this article:
St Vedast Foster Lane Facts for Kids. Kiddle Encyclopedia.