Stan Sakai (スタン坂井code: ja is deprecated , Sutan Sakai, born May 25, 1953) is a Japanese-born American cartoonist and comic book creator. He is best known as the creator of the comic series Usagi Yojimbo.

He began his career by lettering comic books (notably Groo the Wanderer by Sergio Aragonés and Mark Evanier) and wrote and illustrated The Adventures of Nilson Groundthumper and Hermy; a comic series with a medieval setting, influenced by Sergio Aragonés' Groo the Wanderer. The characters first appeared in Albedo #1 in 1984, and were subsequently featured in issues of Critters, Grimjack, Amazing Heroes and Furrlough.

Sakai became famous with the creation of Usagi Yojimbo, the epic saga of Miyamoto Usagi, a samurai rabbit living in late-sixteenth and early-seventeenth-century Japan. First published in 1984, the comic continues to this day, with Sakai as the lone author and nearly sole artist (Tom Luth serves as the main colorist on the series, and Sergio Aragonés has made two small contributions to the series: the story "Broken Ritual" is based on an idea by Aragonés, and he served as a guest inker for the black-and-white version of the story "Return to Adachi Plain" that is featured in the Volume 11 trade paperback edition of Usagi Yojimbo). He also created a futuristic spinoff series Space Usagi. His favorite movie is Satomi Hakkenden (1959). The Japanese American National Museum in Los Angeles's Little Tokyo presented an exhibit entitled "Year of the Rabbit: Stan Sakai's Usagi Yojimbo" from July 9 through October 30, 2011.

Sakai was the artist for Riblet, the back-up feature in the trade paperback of Stupid, Stupid Rat Tails.

In 2013, Sakai illustrated the limited comic book series 47 Ronin, an adaptation of the famed story of the 47 Ronin written by Dark Horse Comics Publisher Mike Richardson and with Lone Wolf and Cub writer Kazuo Koike as an editorial consultant.

The seventh episode of the 2012 Teenage Mutant Ninja Turtles animated series' fifth season, "Yojimbo", was written by Sakai and features Miyamoto Usagi, who has appeared in a few TMNT shows to date.

In 2020, it was revealed that Sakai will serve as an executive producer on the upcoming Netflix original CGI animated series Samurai Rabbit: The Usagi Chronicles, which is based on "Usagi Yojimbo".

From 1993 through 2005, Stan Sakai has received twenty-one Eisner Award nominations. He has also been nominated for the Comics Buyer's Guide Award for Favorite Writer in 1999 and 2000. In 2020, Sakai was inducted into the Eisner Award Hall of Fame. 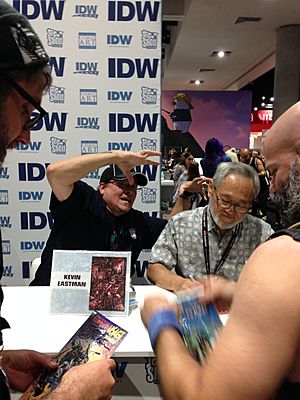 All content from Kiddle encyclopedia articles (including the article images and facts) can be freely used under Attribution-ShareAlike license, unless stated otherwise. Cite this article:
Stan Sakai Facts for Kids. Kiddle Encyclopedia.