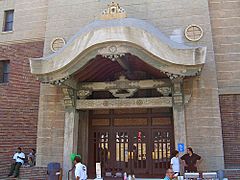 The Japanese American National Museum (全米日系人博物館, Zenbei Nikkeijin Hakubutsukan) is located in Los Angeles, California, and dedicated to preserving the history and culture of Japanese Americans. Founded in 1992, it is located in the Little Tokyo area near downtown. The museum is an affiliate within the Smithsonian Affiliations program.

The museum covers more than 130 years of Japanese-American history, dating to the first Issei generation of immigrants. Its moving image archive contains over 100,000 feet (30,000 m) of 16 mm and 8 mm home movies made by and about Japanese Americans from the 1920s to the 1950s. It also contains artifacts, textiles, art, photographs, and oral histories of Japanese Americans. The Japanese American National Museum of Los Angeles and the Academy Film Archive collaborate to care for and provide access to home movies that document the Japanese-American experience. Established in 1992, the JANM Collection at the Academy Film Archive currently contains over 250 home movies and continues to grow.

Activist Bruce Kaji and other notable Japanese-American individuals conceived of the idea of the museum. The community had become organized around gaining recognition of the injustice they had suffered from the federal government during World War II.

The museum was conceived as a way to preserve the positive aspects of their full history and culture in the United States. When it first opened in 1992, the museum was housed in the 1925 historic Hompa Hongwanji Buddhist Temple building. Irene Hirano served as its first executive director and later as president and CEO of the museum. In January 1999, the National Museum opened its current 85,000-square-foot (7,900 m2) Pavilion, designed under the supervision of architect Gyo Obata, to the public. The temple building was used by government officials in 1942 to process Japanese Americans for wartime confinement. It is now used for offices and storage.

In 1993 the museum was given hundreds of artifacts and letters from children in internment camps, which they had sent to San Diego librarian Clara Breed. The material was featured in an exhibit, "Dear Miss Breed": Letters from Camp. It is now part of the museum's permanent collection.

In 1997, the Frank H. Watase Media Arts Center was established by Robert A. Nakamura and Karen L. Ishizuka, to develop new ways to document, preserve and make known the experience of Americans of Japanese ancestry. In 1999, the Manabi and Sumi Hirasaki National Resource Center (HNRC) was established to provide access to the museum's information and resources, both at the facility and online. It documents the life and culture of the Japanese Americans.

Akemi Kikumura Yano, author, was the museum's first curator. She succeeded Irene Hirano as President and CEO from 2008 until 2011. During her tenure, on December 2010, the museum was awarded the National Medal for Museum and Library Service.

Rev. Greg Kimura, an Episcopal priest, was appointed the president and CEO of the museum, serving between 2012 and 2016. During his time the museum experienced an economic downturn as he looked to promote untraditional exhibits and let go core staff members. He resigned in May 2016 to pursue other work opportunities.

In 2016, Ann Burroughs was announced to replace him as the new interim CEO and was officially selected shortly thereafter. Burroughs spoke of her role: "I am committed to reinvigorating and finding new ways to advance the museum’s key values, emphasizing the importance of being vigilant about democracy and stressing the value of diversity in our world today."

Actor George Takei serves as a member of the museum's board of trustees. He represented it as his charity during his time on The Celebrity Apprentice and during his appearance on The Newlywed Game.

The museum's current longterm exhibition is Common Ground: The Heart of Community, covering 130 years of Japanese American history, from the Issei and early immigration into the United States, World War II incarceration, to the present.

All content from Kiddle encyclopedia articles (including the article images and facts) can be freely used under Attribution-ShareAlike license, unless stated otherwise. Cite this article:
Japanese American National Museum Facts for Kids. Kiddle Encyclopedia.