State Line City is a town in Kent Township, Warren County, Indiana, United States, situated along the state's boundary with Illinois. As of the 2010 census, the town population was 143. 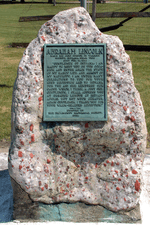 In the mid-1850s, two large railway lines converged on the Indiana-Illinois state line – the narrow-gauge Toledo, Wabash and Western Railway (later the Wabash Railroad), whose route from the east crossed Warren County and reached the state line in October 1856, and the standard-gauge Great Western Railroad, which shortly thereafter reached the state line from the west. State Line City was platted on June 29, 1857 by Robert Casement at the convergence of these two railroads. The city flourished, and within 10 years had reached a population of approximately 550, but because of the drinking and carousing of the numerous railroaders it gained an unsavory reputation.

On February 11, 1861, Abraham Lincoln stopped in State Line on his way from Springfield, Illinois to Washington, D.C. for his inauguration. He dined at the Frazier Eating House, then gave a short speech to a crowd in the public square before resuming his journey. A historical marker on the site commemorates the event, and records the words which Lincoln spoke:

"Gentlemen of Indiana: I am happy to meet you on this occasion, and enter again the state of my early life, and almost of my maturity. I am under many obligations to you for your kind reception and to Indiana for the aid she rendered our cause which, I think, a just one. Gentlemen, I shall address you at greater length at Indianapolis, but not much greater. Again, gentlemen, I thank you for your warm-hearted reception."

The town's post office was established in July 1857, with Robert Casement as the first postmaster, and continues to operate today from a newer building on Woodard Street. Grain elevators were erected in the fall of 1857, but fires in September 1900, December 1932 and June 1984 each completely destroyed the structures, which were subsequently rebuilt. State Line's grain elevators are currently operated by Archer Daniels Midland of Decatur, Illinois, and see considerable activity during harvest time. The town's other large business is a fertilizer and agricultural sales facility northeast of town, built in 1975 and currently operated by Westland Co-Op.

Other establishments in State Line include the Kent Township Fire Department, formed in 1978, which took over local fire protection responsibilities from the West Lebanon Fire Department; in 2000, however, the department merged back with West Lebanon, which now maintains the State Line fire station. The KTFD sponsored for a number of years an annual town festival called the State Line Fun Days, but this is no longer held.

As of 2007, State Line has one active church: the State Line Christian Church, built in 1868. Rev. Gerald Burt has been the pastor there since 1972. The Church of the Nazarene (built around 1860 as a Presbyterian church and purchased for use as a Nazarene church in 1929) and the Methodist Church (built in 1863-4) were both disbanded due to low attendance in the 1990s and have since been turned into homes. Rev. Jim Kessler was the last pastor at the Nazarene church. 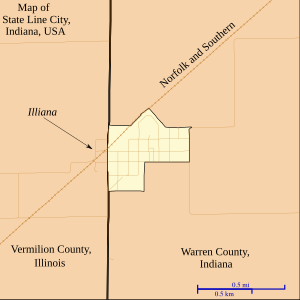 State Line City is located in the southwestern part of the county in open farm land along the border with Illinois, five miles northeast of the city of Danville. According to the 2010 census, State Line City has a total area of 0.14 square miles (0.36 km2), all land.

The section of the community west of the state line is Illiana.

All content from Kiddle encyclopedia articles (including the article images and facts) can be freely used under Attribution-ShareAlike license, unless stated otherwise. Cite this article:
State Line City, Indiana Facts for Kids. Kiddle Encyclopedia.