Kids Encyclopedia Facts
This article is about the statue in Manchester. It is not to be confused with the Emmeline and Christabel Pankhurst Memorial in London.

The statue of Emmeline Pankhurst (officially called Rise Up Women) is a bronze sculpture in St Peter's Square, Manchester, depicting Emmeline Pankhurst, a British political activist and leader of the suffragette movement in the United Kingdom. Hazel Reeves sculpted the figure and designed the Meeting Circle that surrounds it.

The statue was unveiled on 14 December 2018, the centenary of the 1918 United Kingdom general election, the first election in the United Kingdom in which women over the age of 30 could vote. It is the first statue honouring a woman erected in Manchester since a statue of Queen Victoria was dedicated more than 100 years ago.

The statue was created following a five-year project called the WoManchester Statue campaign. This was led by Manchester City Councillor Andrew Simcock. He had initiated the campaign following a meeting in March 2014 with his friend Anne-Marie Glennon in the Sculpture Hall in Manchester Town Hall. Over coffee she had commented "these (busts) are all men. Where are the women!"

Councillor Simcock invited Warp & Weft to restage their exhibition on 30 July 2014, the day Manchester City Council gave its unanimous backing to his resolution that a 'statue of a woman of significance to Manchester' be created.

Initially a twenty-strong list of women was compiled for consideration for the statue:

In June 2015 Councillor Simcock cycled from Lands End to John O'Groats in twenty stages, each one devoted to one of the women on the list.

A shortlist was created in the autumn of 2015 and Emmeline Pankhurst was decisively selected following a vote by thousands of people across the world. 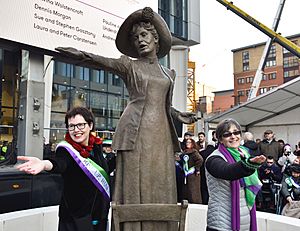 Sculptor Hazel Reeves and descendant Helen Pankhurst at the unveiling

The unveiling was attended by 6,000 people including many who had marched from the Pankhurst Centre near Manchester Royal Infirmary. It was here, as the then home of the Pankhurst family, that the Women's Social and Political Union had been formed.

The event marked exactly 100 years since the first women voted and stood as candidates in a general election. Two marches started from two symbolic locations – the People's History Museum and the Pankhurst Centre – ending up at St Peter's Square, which was attended by 6,000 people including 1,000 local schoolchildren. In July 2018, the Portland stone Pankhurst Meeting Circle, was unveiled, designed to encircle the bronze Emmeline.

The statue was funded by corporate sponsors Manchester Airport Group and Property Alliance Group and from the sale of a limited number of bronze maquettes of the statue. A significant donation also came from the Government's Centenary Fund (Centenary Cities).

First In the Fight

Maintenance of the statue

The WoManchester Statue campaign specifically set out to raise money covering the maintenance of the statue.

All content from Kiddle encyclopedia articles (including the article images and facts) can be freely used under Attribution-ShareAlike license, unless stated otherwise. Cite this article:
Statue of Emmeline Pankhurst Facts for Kids. Kiddle Encyclopedia.