Stekene is a municipality located in the Belgian province of East Flanders. Since 1976, the municipality has comprised the towns of Kemzeke, Klein-Sinaai and Stekene proper. It also includes the villages of Hellestraat and Koewacht. On July 1, 2007, Stekene had a total population of 17,040. The total area is 44.80 km² which gives a population density of 376 inhabitants per km².

Stekene profiles itself as an oasis of green within industrialized Flanders as a large part of its area consists of forests and agricultural lands. The E34 road, from Antwerp to the coast, passes through the municipality and also has its own access to it. Another part of the community is the N403, which connects to Sint-Niklaas. 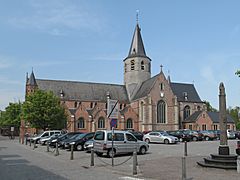 The municipality of Stekene is located in the region of Waasland, on the border with the Netherlands, 10 km north-west of Sint-Niklaas and 20 km west of Antwerp. Stekene borders Sint-Gillis-Waas in the east, Sint-Niklaas to the south, Moerbeke to the west and the Dutch town of Hulst to the north. It is 30.4 kilometres (18.9 mi) distant from Antwerp, Belgium. Template:Municipalities in East Flanders

All content from Kiddle encyclopedia articles (including the article images and facts) can be freely used under Attribution-ShareAlike license, unless stated otherwise. Cite this article:
Stekene Facts for Kids. Kiddle Encyclopedia.