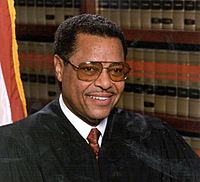 Stephan P. Mickle (June 18, 1944 – January 26, 2021) was an American politician and lawyer. He was the Judge of the United States District Court for the Northern District of Florida from 1998 until his death. He was chief justice of the court from 2009 to 2011. Mickle was nominated to the court by President Bill Clinton. Mickle was born in New York City.

All content from Kiddle encyclopedia articles (including the article images and facts) can be freely used under Attribution-ShareAlike license, unless stated otherwise. Cite this article:
Stephan P. Mickle Facts for Kids. Kiddle Encyclopedia.