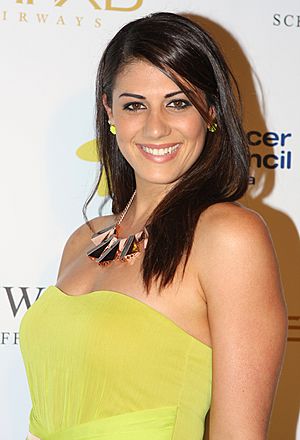 Stephanie Louise "Steph" Rice OAM (born 17 June 1988) is a former Australian swimmer. She won three gold medals at the 2008 Summer Olympics in Beijing. She also competed at the 2012 Summer Olympics in London. She confirmed her retirement from competitive swimming on 9 April 2014.

Rice was born in Brisbane, Queensland. In 2013, she won the third season of The Celebrity Apprentice Australia.

All content from Kiddle encyclopedia articles (including the article images and facts) can be freely used under Attribution-ShareAlike license, unless stated otherwise. Cite this article:
Stephanie Rice Facts for Kids. Kiddle Encyclopedia.