Steven Shih Chen (born August 25, 1978) is an American Internet entrepreneur who is one of the co-founders and previous chief technology officer of the video-sharing website YouTube. After having co-founded the company AVOS Systems, Inc. and built the video-sharing app MixBit, he joined Google Ventures in 2014.

Chen was born in Taipei, Taiwan. When he was eight years old, he and his family immigrated to the United States and settled in Prospect Heights, Illinois. He went to River Trails Middle School in Mount Prospect for his middle school education and John Hersey High School in Arlington Heights for his freshman year of high school. For his final three years of high school, he attended the Illinois Mathematics and Science Academy in Aurora, Illinois. However, he did not graduate from IMSA. At the University of Illinois at Urbana-Champaign, he studied computer science. He graduated in 2002. 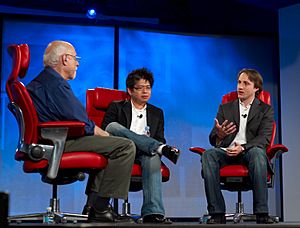 Chen was an employee at PayPal, where he first met Chad Hurley and Jawed Karim. Chen was also an early employee at Facebook, although he left after several months to start YouTube.

In 2005, Chad Hurley, Jawed Karim and Chen founded YouTube, with Chen having the position of chief technology officer. In June 2006, Chen was named by Business 2.0 as one of "The 50 people who matter now" in business.

He and Hurley started AVOS Systems which acquired Delicious from Yahoo! Inc.

Chen was inducted as a Laureate of The Lincoln Academy of Illinois and awarded the Order of Lincoln (the State's highest honor) by the Governor of Illinois in 2018.

Chen married Park Ji-hyun, who is now Jamie Chen, a Google Korea product marketing manager, in 2009. They live in San Francisco with their two children. One son was born in July 2010. The Chens are major supporters of the Asian Art Museum of San Francisco where Jamie was appointed a trustee in July 2012.

All content from Kiddle encyclopedia articles (including the article images and facts) can be freely used under Attribution-ShareAlike license, unless stated otherwise. Cite this article:
Steve Chen Facts for Kids. Kiddle Encyclopedia.