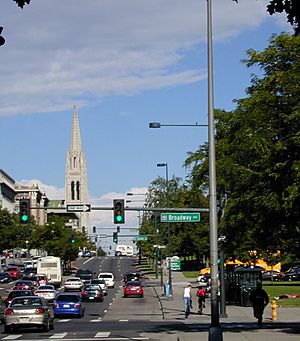 Colfax Avenue at Broadway, where the downtown street grid and the "normal" city grid meet

The oldest part of Denver, now the neighborhoods of Auraria Campus, LoDo, much of downtown, and Five Points, is laid out on a grid plan that is oriented diagonal to the four cardinal directions. The rest of the city, including the eastern part of downtown, is laid out primarily on a grid oriented to the cardinal directions. In this larger grid, from east to west, there are generally 16 city blocks per mile, except between Zuni Street and Lowell Boulevard in west Denver. From north to south, there are typically eight blocks per mile, although there are many areas with more blocks per mile. Addresses follow a decimal system, with addresses advancing by one hundred at each cross street.

Some major arterial roads, such as Leetsdale Drive and South Santa Fe Drive, fall outside this pattern and run diagonally through the city. These roads generally originated as county roads or other major routes used by early settlers. The names of many of these roads change as they wind through the grid, following the name officially designated for a road in that area. Interstate highways do not follow the grid plan.

Modern Denver has two grids. One is laid out diagonal with respect to the four cardinal directions and is found on Auraria Campus, downtown, and northeast of downtown into the Five Points neighborhood. Most of the rest of the city's streets, as well as many of those of the surrounding suburbs, are laid out in an east–west/north–south pattern. These two grids result from early land development in the area.

The first streets in Denver were platted in what was then the town of Auraria, founded in 1858; it was the first permanent settlement of Europeans in Colorado, which was then part of the Kansas Territory. The streets were laid out parallel to the south bank of Cherry Creek near its confluence with the South Platte River, with perpendicular cross streets. Because they followed the path of a natural body of water, these streets were diagonal to the four cardinal directions.

The town of St. Charles, later named Denver, was founded later in 1858, located across Cherry Creek from Auraria. Its founder, General William Larimer, and William McGaa, an early settler, collaborated to plot and name the streets of the new town. These were laid out parallel not to Cherry Creek, but to the South Platte River with perpendicular cross streets. Because Cherry Creek and the South Platte meet at nearly a 90° angle, the cross streets of Auraria were nearly parallel to the streets of Denver and vice versa.

In 1864, developer Henry C. Brown laid out the first streets in Denver parallel to the cardinal directions, with streets running directly north–south and east–west. His grid was located directly east of Denver (which had absorbed Auraria in 1860), from what is now Broadway to the alley between Grant and Logan Streets and from 11th to 20th Avenues. This layout followed federal land policy.

About the same time, territorial governor John Evans laid out streets on an east–west/north–south grid south of the original Denver plat, southeast of the modern intersection between Broadway and Colfax Avenue.

Denver grew rapidly in its first thirty years. Areas were developed with little direction from the government of the young city, with each developer platting streets largely independently of others. As a result, where original developments meet, many streets do not line up with one another; for example, there are many displacements on East Colfax Avenue in streets running north and south. In fact, while there are 40 city blocks between Broadway and Colorado Boulevard south of East Colfax Avenue, there are only 39 blocks in the same stretch on the north side.

Street names reflected this bottom-up emergence, and street names were not coordinated from development to development, even for along the same north-south or east-west line. Some names were used more than once, by different streets across various Denver neighborhoods and surrounding towns. There was no universal system for the use of terms like "street", "avenue", etc. Later, these terms were defined such that "street" designated roads running north and south and aligned with the 100s of the numbering system, with "court" for intermediate (non-100s) north-south roads and "way" for roads which start north-south but curve to intersect with another north-south road; "avenue", "place", and "drive" (respectively) are the corresponding terms for roads running east and west. Major arterials in both directions, however, are often called "boulevards", and "road" and "parkway" also make appearances.

Attempts to rationalize the street system began early. In 1873, the diagonal streets of Auraria and original Denver were renamed, with the zero point at the original southwest corner of Denver, the intersection of West Colfax Avenue and Zuni Street, near the South Platte River. According to this system, still in place in modern Denver, streets running from northwest to southeast are designated as heading north from the zero point and are numbered, while streets running from northeast to southwest are designated as heading east from the zero point and are named. A notable exception came when 23rd Street, which had been treated like any other numbered streets in downtown Denver, was renamed Park Avenue West and designated as running west rather than north, in order to match up with its eastern continuation, Park Avenue, which extends diagonally south-east into the otherwise compass-oriented grid east of Broadway.

The east-west avenues, originally named, were first numbered in 1871, with modern East 35th Avenue designated First Avenue; however, this system was abandoned in 1886, when the city passed an ordinance linking avenue numbers to the street numbers of the diagonal grid. Where a numbered street met an avenue at Broadway, the avenue was given the number of the connecting street; thus 16th Street provided the number for 16th Avenue, and so forth. An exception was Colfax Avenue, which meets 15th Street and is the equivalent of 15th Avenue, but retained its original name.

The avenues were then numbered consecutively to the north, even where they began to deviate from the diagonal grid, so that 27th Street meets 26th Avenue in the Five Points intersection. They are also extrapolated north of the grid, beyond Denver's main northern border at 52nd Avenue to 168th Avenue at the border between Adams and Weld Counties. Avenue numbers are also extrapolated south from Colfax to First Avenue. Ellsworth Ave is the 00 point, and south of here avenues are named.

Development of the modern decimal grid

In 1887, a decimal grid was imposed. Instead of counting addresses up arbitrarily along a direction, this system specified a "hundred block" for each street. For example, First Street is the 100 block, with all addresses on any named street between First and Second Streets ascending from 100 (nearest First Street) to 199 (nearest Second Street). Named streets also follow this pattern, with Cheyenne Place designated the 100 block and numbers increasing toward the northwest. In the diagonal grid, even-numbered addresses are on the west (i.e. southwest) sides of numbered streets and the east (i.e. northeast) side of named streets.

In the rest of the grid, even numbers are on the east sides of streets and the south sides of avenues, while odd numbers are on the west sides of streets and north sides of avenues. This decimal system forms a Cartesian coordinate system whose axes are Broadway (north−south) and Ellsworth Avenue (east−west). For numbered avenues, the hundred block corresponds to the number of the avenue (e.g. 17th Avenue designates the 1700 block North). Avenues south of Ellsworth are named, as are all streets running north−south, and have hundred-block numbers extending from the axes. Strictly speaking, only the portions of streets south of Ellsworth need be designated "South" and the portions of avenues west of Broadway need be designated "West." Without a directional designation, streets are automatically assumed to be north of Ellsworth and avenues assumed to be east of Broadway, although it is common to refer to these avenues are "East".

Street names were originally applied with no consistency; the same road designation might have as many as ten different names in different parts of the city, and many different roads might share the same name. This inconsistency created significant problems for the Denver Union Water Company, which had difficulties both providing service and billing because of the chaotic street system. A bookkeeper, Howard Maloney, collaborated with the city to impose an orderly set of names to the roads, with each unique name designating exactly one road. In most areas, these streets are named in alphabetical order. The first set of changes took place in 1897, with further renaming in 1904. In 1906, many adjacent communities adopted Denver's system.

The City and County of Denver's zoning board classifies streets into three types based on functionality. Arterials are major routes, arranged in a network to provide mobility around the city. Collector streets move traffic from arterials into neighborhoods and business districts. All other streets are local streets, which provide access to individual lots.

Highways that have portions running in or near Denver include:

All content from Kiddle encyclopedia articles (including the article images and facts) can be freely used under Attribution-ShareAlike license, unless stated otherwise. Cite this article:
Street system of Denver Facts for Kids. Kiddle Encyclopedia.