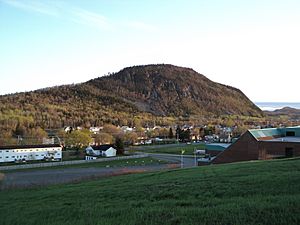 Sugarloaf Mountain, as seen from Campbellton

Sugarloaf Mountain is a 281.1 m (922 ft) mountain in the northern Appalachian Mountains in Campbellton, New Brunswick, Canada. The mountain is protected by Sugarloaf Provincial Park and lies within city limits, just south of the urban area.

Sugarloaf Mountain lies within the 11.5 km2 (4.4 sq mi) Sugarloaf Provincial Park. Sugarloaf Mountain is encircled by a perimeter road which is closed to motor vehicles and is available for walking, jogging and running during the spring, summer and fall seasons. During the winter season, this perimeter road is groomed for cross country skiing. The summit of Sugarloaf Mountain itself is accessible from a hiking trail that climbs its eastern slope; this trail is closed during the winter season and is suitable for those with intermediate hiking experience. At the summit, a viewing platform provides hikers with a vista of the Restigouche River valley including the City of Campbellton, village of Atholville as well as other rural communities in New Brunswick and Quebec.

Sugarloaf Provincial Park has an alpine ski resort on another mountain ridge that is adjacent to but separate from Sugarloaf Mountain. During the winter months, the alpine ski resort offers a variety of alpine skiing for all enthusiasts ranging from beginner to expert, as well as other winter activities such as snowshoeing, cross country skiing, ice skating, snowmobiling, and sleigh rides. During the summer months, the resort still operates its ski lift so that park visitors may ride it to take in vistas of the river valley. The alpine ski hill also offers a downhill mountain bike park.

Sugarloaf Mountain is a Late Devonian age volcano. Its formation is associated to a period of crustal thinning that followed the Acadian orogeny in the northern Appalachian Mountains. Its rock is felsic.

A Mi'kmaq legend states that Sugarloaf Mountain was created when Glooscap flung the leader of a group of giant beavers that had dammed the Restigouche River, blocking the salmon from their spawning grounds and depriving the Mi'kmaq of their food source. The beaver landed at the mountain's site and turned into rock, becoming Sugarloaf Mountain.

All content from Kiddle encyclopedia articles (including the article images and facts) can be freely used under Attribution-ShareAlike license, unless stated otherwise. Cite this article:
Sugarloaf Mountain (New Brunswick) Facts for Kids. Kiddle Encyclopedia.