Sullivan is a city in Hamilton Township, Sullivan County, Indiana, United States. The population was 4,249 at the 2010 census. It is part of the Terre Haute Metropolitan Statistical Area. The city is the county seat of Sullivan County.

The Sullivan post office has been in operation since 1843. 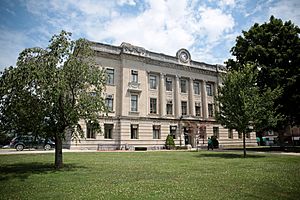 The town is served by the Southwest School Corporation, and students go to Sullivan High School.

Sullivan has a public library, a branch of the Sullivan County Public Library.

All content from Kiddle encyclopedia articles (including the article images and facts) can be freely used under Attribution-ShareAlike license, unless stated otherwise. Cite this article:
Sullivan, Indiana Facts for Kids. Kiddle Encyclopedia.