Will H. Hays facts for kids

William Harrison Hays, Sr. (November 5, 1879 – March 7, 1954) was chairman of the Republican National Committee from 1918–21. He was United States Postmaster General from 1921–22. He is best known for the Hays Code for censorship of American movies. He was born in Sullivan, Indiana.

He was the manager of Warren G. Harding's successful campaign for the Presidency of the United States in 1920. He was then named Postmaster General. While serving in the Harding Administration, he became somewhat involved in the Teapot Dome scandal. This was because of some illegal donations.

The goal of the group was to rescue the image of the movie industry because of a scandal at that time.

In his new role in Hollywood, Hays' main task was to stop American state censor boards from banning movies that were too dirty to be shown. He also had to keep costs down for the movie studios for changes made to give a movie an acceptable rating. At that time, the movie studios were required by state laws to pay the censor boards for each foot of movie that was cut out. Studios also had the expense of making different versions of each censored movie for each state's different ruling. 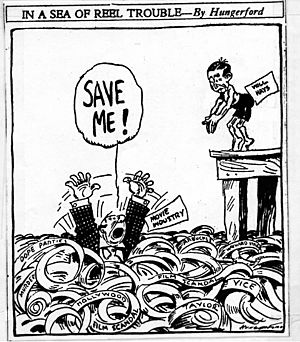 1922 editorial cartoon by Cy Hungerford illustrating the perception that Hays was coming to rescue the movie industry.

Hays tried to reduce studio costs by telling studios how to make movies that would be safe enough not to have to be cut or changed. Each board kept its "standards" secret. Hays had to try to guess what would or would not be allowed by each board. He made a set of guidelines he called "The Don'ts and Be Carefuls". In general he was not successful in quieting demands for federal censorship.

Catholic bishops and non-church people were suspicious of federal censorship. They preferred the Hays approach of self-censorship. For several months in 1929, a group of Catholic leaders tried to come up with a new stricter code of behavior for the movies. A church Father wrote the legal code. This later became known as "The Hays Code". It was shown to Will Hays in 1930. He said, "My eyes nearly popped out when I read it. This was the very thing I had been looking for".

From 1930 to 1934, the Production Code was only somewhat helpful in fighting off calls for federal censorship. Things came to a head in 1934, with widespread threats of Catholic boycotts of immoral movies. The studios gave the MPAA full authority to enforce the Production Code on all studios. These strict rules of self-censorship lasted for decades. (The Code was finally set aside in the 1960s when the MPAA adopted the age-based rating system now in force.)

Also in 1934, Hays made a list of 117 names of actors and actresses whose personal lives he thought made them unfit to appear in movies.

Many European nations had quotas to make more of their own movies instead of Hollywood imports. A big success of Hays was his ability to work with the U.S. State Department and the U.S. Department of Commerce, to keep Hollywood on top of overseas movie markets.

All content from Kiddle encyclopedia articles (including the article images and facts) can be freely used under Attribution-ShareAlike license, unless stated otherwise. Cite this article:
Will H. Hays Facts for Kids. Kiddle Encyclopedia.