Sumrall is a town in Lamar County, Mississippi. It is part of the Hattiesburg, Mississippi Metropolitan Statistical Area. The population was 1,005 at the 2000 census.

Sumrall was one of many new towns incorporated along the Mississippi Central Railroad during the first decade of the 20th century. Prior to the arrival of the railroad, founder Daniel Sumrall operated a grist mill along Mill Creek. In 1890, the federal government established a post office in the community and named it Sumrall. The J. J. Newman Company, headed by Fenwick Peck, chose the site as the location for a large sawmill. Situated in the heart of South Mississippi's pine belt, the location was ideal for just such a large mill. Evidence of the quality of timber in the area is supported by a prize-winning short leaf pine displayed at the 1904 World's Fair in St. Louis. The tree was 160 feet tall, measured 20 feet in circumference and was 6 feet eight inches in diameter. With the arrival of the railroad, the town grew quickly and petitioned for incorporation as a town; this wish was granted by the Mississippi Legislature on October 6, 1903. Some early residents wanted to change the name of the town because, although Daniel Sumrall was a native of Perry County in Mississippi, he had served in the Civil War as a Union soldier. The federal government had the final choice in the matter and, as they refused to change the name of the post office, any change in the name of the city would have been meaningless. 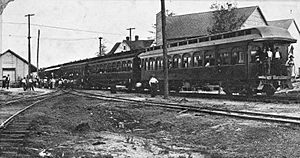 For nearly 30 years the Newman Lumber Company was the main industry of the city. As the timber industry was a "cut out and get out" operation at this time, when the mill depleted the profitable timber supply it ceased operation in 1931. Combined with the Great Depression, the shutdown of the mill had a marked impact on the town and left it with no large employer for nearly 20 years. In 1949, the Movie Star Company opened a plant in nearby Purvis, and soon opened a similar plant in Sumrall which provided stable employment for many local women until the 1990s. The population of the city remained flat or declined from 1940-2000. As the metropolitan area of Hattiesburg has expanded westward, Sumrall is now once again experiencing economic growth. The Longleaf Trace, a recreational trail which follows the route of the former Mississippi Central Railroad, runs through the center of town. The Longleaf Trace extends from Hattiesburg, MS to Prentiss Mississippi and is popular with bikers, hikers, and horseback riders.

The climate in this area is characterized by relatively high temperatures and evenly distributed precipitation throughout the year. According to the Köppen Climate Classification system, Sumrall has a humid subtropical climate, abbreviated "Cfa" on climate maps.

There were 406 households of which 34.5% had children under the age of 18 living with them, 48.0% were married couples living together, 15.8% had a female householder with no husband present, and 34.5% were non-families. 32.3% of all households were made up of individuals and 17.2% had someone living alone who was 65 years of age or older. The average household size was 2.43 and the average family size was 3.09.

All content from Kiddle encyclopedia articles (including the article images and facts) can be freely used under Attribution-ShareAlike license, unless stated otherwise. Cite this article:
Sumrall, Mississippi Facts for Kids. Kiddle Encyclopedia.