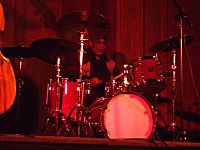 James Marcellus Arthur "Sunny" Murray (September 21, 1936 – December 8, 2017) was an American jazz drummer. He was one of the pioneers of the free jazz style of drumming. He was born in Philadelphia, Pennsylvania. He later recorded under his own name for ESP-Disk and then when he moved to Europe for BYG Actuel.

All content from Kiddle encyclopedia articles (including the article images and facts) can be freely used under Attribution-ShareAlike license, unless stated otherwise. Cite this article:
Sunny Murray Facts for Kids. Kiddle Encyclopedia.