Kids Encyclopedia Facts
This page is about the king from the royal dynasty of Travancore. For the 1987 Indian film, see Swathi Thirunal (film).

Svāti Tirunāḷ‍ Rāma Varma (Malayalam: സ്വാതി തിരുനാള്‍ രാമവർമ്മ) (16 April 1813 – 26 December 1846) was the Maharaja of the Kingdom of Travancore. He is also considered as a brilliant music composer and is credited with over 400 classical compositions in both Carnatic and Hindustani style.

A well-formulated code of laws, courts of justice, introduction of English education, construction of an observatory, installation of the first Government printing press, establishment of the first manuscripts library were amongst the many initiatives taken by Svāti Tirunāḷ‍, as a King, to modernise Travancore. 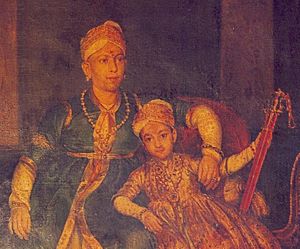 Svāti Tirunāḷ‍ was born into the Venad dynasty of the Matrilineal royal family of Travancore, which is now a part of Kerala, on 16 April 1813. He was the second child of Queen Gowri Lakshmi Bayi who ruled Travancore from 1811–15, and Raja Raja Varma Koil Thampuran of Changanasseri Palace, and the elder son. While in the womb itself, he was proclaimed King and thus was referred to as Garbha Sreemaan. He was born in Svati star, and this is the reason why he was named Swathi Thirunal. He reigned under the regency of his mother from 1813–15 and then under the regency of his maternal aunt Gowri Parvati Bayi until 1829. When he was just four months old, his mother invited Colonel John Munro, representative of the East India Company, and his officials and declared in the Durbar that she was entrusting the East India Company with the care of her child and expected the Company to co-operate with him in future.

In 1829 Svāti Tirunāḷ‍ reached majority at 16 and assumed full powers of ruler and reigned as the Maharajah of Travancore until his death in 1846. He had an elder sister, Gowri Rukmini Bayi, whose children ascended the Travancore musnud consecutively. Her only daughter was the mother of Moolam Thirunal. He had a younger brother, Uthram Thirunal Marthanda Varma, who succeeded him in 1846 and ruled Travancore until his demise in 1860.

Both his aunt/foster mother, who was well-versed in music, and his father, a Sanskrit scholar, took special care about his education. Col. Munro also is said to have taken a keen interest in his education. He started learning Malayalam and Sanskrit at the age of six and English at the age of seven. The young Prince studied several languages, including Malayalam, Kannada, Tamil, Hindustani, Telugu, Marathi, Sanskrit, English and Persian. He impressed all his teachers, and even guests from abroad, with his keen understanding of not only languages but also other subjects like geometry. P. Sankunni Menon (A History of Travancore from the Earliest Times, 1878) records an incident between young Svāti Tirunāḷ‍ and Col. Welsh, a visiting British officer, that the word geometry and words like hexagon, heptagon and so on were derived from Sanskrit. Colonel Welsh summed up the boy King's genius as follows :

Swati Tirunal, now thirteen... took up a book of mathematics and selecting the forty-seventh proposition of Euclid sketched the figure on a country slate but what astonished me most was his telling us in English that Geometry was derived from the Sanskrit, which as Jaw metor (Jyamiti) to measure the earth and that many of our mathematical terms were also derived from the same source such as hexagon, heptagon, octagon... This promising boy is now, I conclude, sovereign of the finest country in India for he was to succeed to the Musnud (throne) the moment he had attained his 16th year.

As Reigning Maharajah of Travancore 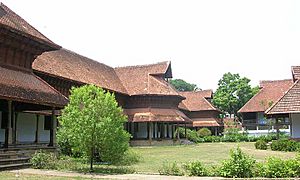 Svāti Tirunāḷ‍ took over the reins of Travancore from his aunt, Gowri Parvati Bayi (she was the Regent for Svāti Tirunāḷ‍ in his boyhood) at the age of sixteen. He appointed his tutor, Sri Subba Rao, as the Prime Minister (Diwan). One of his first moves was to shift the government secretariat from Kollam (about seventy-five kilometers away) to Thiruvananthapuram. This enabled him to give personal attention to government affairs. He took steps to curb corruption in the government and told even the Diwan to resign when he heard that the Diwan had acted to favour a particular party in a land dispute. He started an English school in Thiruvananthapuram in 1834, which came to be called the Maharajah's Government Free School and later became Maharajah's High School and then Maharajah's College. It is now the University College. Later, similar schools were started at many other places. He also implemented reforms in the legal sector, starting Munsif, District and Appellate Courts and modernizing laws. He identified one Kandan Menon from Malabar and appointed him as Huzoor Diwan Peshkar to bring about legal reforms. Another of his achievements was to settle many land disputes by carrying out a resurvey of the land, in which also Menon helped him. He also conducted the first census of the state in 1836. As per the census, the population of Travancore was 128, 068.

Svāti Tirunāḷ‍ was also instrumental in bringing modern medicine to the state. He appointed a European as the palace physician. He was also given the responsibility of providing medical assistance to local people, for which hospitals were started. It is this post that was known as Surgeon General till the formation of Kerala State. He also started an engineering department, which was placed under the command of one Lieutenant Horsley. The Karamana bridge was built at that time.

Prince Rama Varma, renowned South Indian Classical musician and descendant of Swathi Thirunal, organizes the Swathi Sangeethotsavam, a 10-day music festival featuring exclusively the compositions of Maharaja Swathi Thirunal. Eminent Carnatic and Hindustani musicians participate in this unique musical event, which is conducted every year from 4 to 13 January at Kuthira Malika, Trivandrum and attracts music aficionados from across the globe.

The award Swathi Sangeetha Puraskaram is instituted in the name of Maharajah Swathi Thirunal of Travancore to honour those musicians who have made valuable contributions to the field of music. It is also the highest honour for musicians by the Government of Kerala, India.

For a list of 360+ compositions with 200+ MP3s, visit swathithirunal.in

All content from Kiddle encyclopedia articles (including the article images and facts) can be freely used under Attribution-ShareAlike license, unless stated otherwise. Cite this article:
Swathi Thirunal Rama Varma Facts for Kids. Kiddle Encyclopedia.