Galium odoratum, the sweetscented bedstraw, is a flowering perennial plant in the family Rubiaceae, native to much of Europe from Spain and Ireland to Russia, as well as Western Siberia, Turkey, Iran, the Caucasus, China and Japan. It is also sparingly naturalized in scattered locations in the United States and Canada. It is widely cultivated for its flowers and its sweet-smelling foliage.

A herbaceous plant, it grows to 30–50 cm (12–20 in) long, often lying flat on the ground or supported by other plants. Its vernacular names include woodruff, sweet woodruff, and wild baby's breath; master of the woods would be a literal translation of the German Waldmeister. It is sometimes confused with Galium triflorum and Galium verum.

It owes its sweet smell to the odiferous agent coumarin, and is sometimes used as a flavoring agent due to its chemical content. 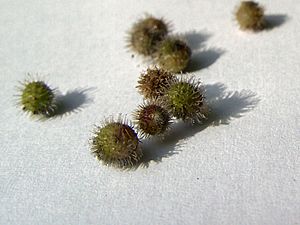 The leaves are simple, lanceolate, glabrous, 2–5 cm (0.79–1.97 in) long, and borne in whorls of 6–9. The small (4–7 mm diameter) flowers are produced in cymes, each white with four petals joined together at the base. The fruits are 2–4 mm diameter, produced singly, and each is covered in tiny hooked bristles which help disperse them by sticking temporarily to clothing and animal fur.

This plant prefers partial to full shade in moist, rich soils. In dry summers it needs frequent watering. Propagation is by crown division, separation of the rooted stems, or digging up of the barely submerged perimeter stolons. It is ideal as a groundcover or border accent in woody, acidic gardens where other shade plants fail to thrive. Deer and chickens avoid eating it (Northeast US).

As the epithet odoratum suggests, the plant is strongly scented, the sweet scent being derived from coumarin. This scent increases on wilting and then persists on drying, and the dried plant is used in potpourri and as a moth deterrent. It was, and partially is, used to flavour May wine (called "Maibowle" or "Maitrank" in German), sweet juice punch, syrup for beer (Berliner Weisse), brandy, jelly, jam, a soft drink (Tarhun, which is Georgian), ice cream, and herbal tea. Also very popular are Waldmeister flavoured jellies, with and without alcohol. In Germany, it was also used to flavour sherbet powder, which features prominently in Günter Grass' novel The Tin Drum.
However, the usage of the plant for sweets was prohibited in Germany in 1974, due to the plant's low level toxicity, which increases upon drying, and is particularly problematic for children, due to their lower body mass. The toxicity stems from the presence of coumarin, which can create sickness, headaches, and damage the liver when ingested in greater quantities. The flavor is still popular for sweets in Germany, but is achieved artificially with other flavoring agents. Products targeted towards adults, such as alcoholic drinks, are still permitted to include coumarin, in limited quantities.

All content from Kiddle encyclopedia articles (including the article images and facts) can be freely used under Attribution-ShareAlike license, unless stated otherwise. Cite this article:
Sweetscented bedstraw Facts for Kids. Kiddle Encyclopedia.