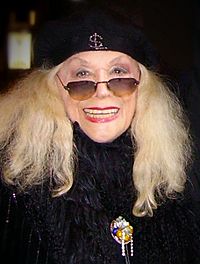 Sylvia Miles (September 9, 1924 – June 12, 2019) was an American actress. She was born in Greenwich Village, New York City. She was twice nominated for the Academy Award for Best Supporting Actress for her roles in Midnight Cowboy (1969) and Farewell, My Lovely (1975). She also starred as Mrs. Fisher in the comedy She-Devil (1989).

Miles died on June 12, 2019 in Manhattan at the age of 94. She was suffering from anemia and respiratory illnesses at the time of her death.

All content from Kiddle encyclopedia articles (including the article images and facts) can be freely used under Attribution-ShareAlike license, unless stated otherwise. Cite this article:
Sylvia Miles Facts for Kids. Kiddle Encyclopedia.