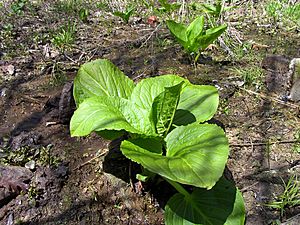 Symplocarpus foetidus leaves out in mid-spring after the flowers have bloomed.

The eastern skunk cabbage is native to eastern North America, from Nova Scotia and southern Quebec west to Minnesota, and south to North Carolina and Tennessee. It is protected as endangered in Tennessee.

Breaking or tearing a leaf produces a pungent but harmless odor, the source of the plant's common name; it is also foul smelling when it blooms. The plant is not poisonous to the touch. The foul odor attracts its pollinators: scavenging flies, stoneflies, and bees. The odor in the leaves may also serve to discourage large animals from disturbing or damaging this plant, which grows in soft wetland soils.

Eastern skunk cabbage is notable for its ability to generate temperatures of up to 15–35 °C (27–63 °F) above air temperature by cyanide resistant cellular respiration in order to melt its way through frozen ground, placing it among a small group of thermogenic plants. Even though it flowers while there is still snow and ice on the ground, it is successfully pollinated by early insects that also emerge at this time. Some studies suggest that beyond allowing the plant to grow in icy soil, the heat it produces may help to spread its odor in the air. Carrion-feeding insects that are attracted by the scent may be doubly encouraged to enter the spathe because it is warmer than the surrounding air, fueling pollination.

Eastern skunk cabbage has contractile roots which contract after growing into the earth. This pulls the stem of the plant deeper into the mud, so that the plant in effect grows downward, not upward. Each year, the plant grows deeper into the earth, so that older plants are practically impossible to dig up. They reproduce by hard, pea-sized seeds which fall in the mud and are carried away by animals or by floods.

Some blowflies, such as Calliphora vomitoria are known pollinators of skunk cabbage.

In the 19th century the U.S. Pharmacopoeia listed eastern skunk cabbage as the drug "dracontium". It was used in the treatment of respiratory diseases, nervous disorders, rheumatism, and dropsy. In North America and Europe, skunk cabbage is occasionally cultivated in water gardens. Skunk cabbage was used extensively as a medicinal plant, seasoning, and magical talisman by various tribes of Native Americans. The thoroughly dried young leaves are quite good reconstituted in soups or stews. The thoroughly dried rootstocks can be made into a pleasant cocoa-like flour.

Skunk cabbage often contains calcium oxalate crystals, and therefore the plant is considered to have medium toxicity to humans. The toxicity may be removed through careful preparation.

All content from Kiddle encyclopedia articles (including the article images and facts) can be freely used under Attribution-ShareAlike license, unless stated otherwise. Cite this article:
Symplocarpus foetidus Facts for Kids. Kiddle Encyclopedia.