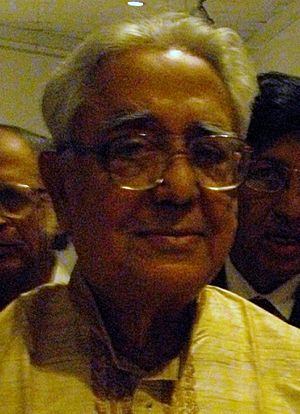 Tapan Raychaudhuri (8 May 1924 - 26 November 2014) was an Indian historian. He was an expert in British Indian history, Indian economic history and the History of Bengal.

He was a Reader in Modern South Asian History at University of Oxford from 1973 to 1992. He was also Fellow of St. Anthony College, Oxford from 1973-93 where he remained as an Emeritus Fellow until his death in 2014.

Raychaudhuri died after suffering a series of strokes at his home in Oxford, England on 26 November 2014, aged 90.

All content from Kiddle encyclopedia articles (including the article images and facts) can be freely used under Attribution-ShareAlike license, unless stated otherwise. Cite this article:
Tapan Raychaudhuri Facts for Kids. Kiddle Encyclopedia.