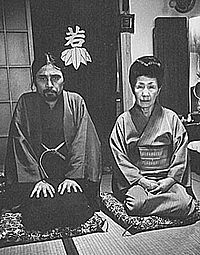 Tatsumi Hijikata (土方 巽code: ja is deprecated , Hijikata Tatsumi, March 9, 1928 – January 21, 1986) was a Japanese choreographer, and the founder of a genre of dance performance art called Butoh. By the late 1960s, he had begun to develop this dance form, which is highly choreographed with stylized gestures drawn from his childhood memories of his northern Japan home. It is this style which is most often associated with Butoh by Westerners.

All content from Kiddle encyclopedia articles (including the article images and facts) can be freely used under Attribution-ShareAlike license, unless stated otherwise. Cite this article:
Tatsumi Hijikata Facts for Kids. Kiddle Encyclopedia.