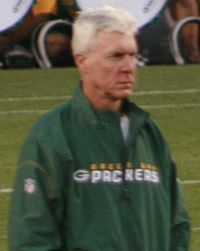 Ted Thompson (January 17, 1953 – January 20, 2021) was an American professional football player and executive in the National Football League (NFL). He was born in Atlanta, Texas.

In May 2019, Thompson announced that he was diagnosed with dysautonomia, an autonomic disorder. He died on January 20, 2021 in Atlanta, Texas from the disease, three days after his 68th birthday.

All content from Kiddle encyclopedia articles (including the article images and facts) can be freely used under Attribution-ShareAlike license, unless stated otherwise. Cite this article:
Ted Thompson Facts for Kids. Kiddle Encyclopedia.