Temple is a district of Glasgow, in the north of the city, bounded by Anniesland to the south, Knightswood to the west and Kelvindale to the east. Netherton lies to the North. Temple appears in Joan Blaeu's 1662 Atlas of Scotland and many subsequent maps.

Temple, like many of Glasgow's suburbs, was originally a village of its own, situated in the Parish of Kilpatrick, later New Kilpatrick in Dunbartonshire. It was swallowed by Glasgow's expansion in the late 19th and early 20th centuries. It was annexed by Glasgow in 1912. Mills were the primary employers in the old village, although coal was mined here for a period and transported to the River Clyde via the nearby Forth and Clyde Canal in Netherton.

Temple once had a parish church of its own within the Presbytery of Glasgow, staffed by assistant ministers from within New Kilpatrick parish. Temple Parish Church united with Anniesland to form Temple-Anniesland in 1984 and the original buildings are now demolished. Temple retains its Methodist church.

Temple has gone under a regeneration programme in the last fifteen years. Many new housing projects have been built, boosting the economic viability of the area. 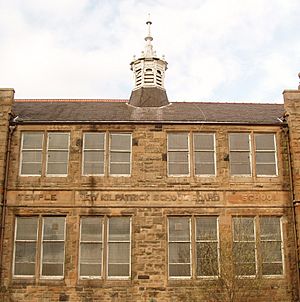 Temple has its own park, Temple Park, a small playground for children and spans a large grassy field. The closest railway station is Anniesland. There is a David Lloyds leisure centre. The Forth and Clyde Canal runs through. It is often used by local people for fishing.

For shopping, Temple has several small stores, and also has Morrison's (formerly one of Safeway's "Megastore" pilot stores) close by in Anniesland, and has an Aldi at Temple Park.

Temple had its own Primary School (Temple Primary School) built in 1901. The school closed in summer 2007. Temple primary school has now been converted to a private Nursery School, which is called Little Me Nursery School. Nearby Knightswood Primary was upgraded to accommodate the transfer of pupils and staff.

Temple/Shafton Youth Project is a long established project that has been in operation since 1987. It works with both young people and adults in the G13 area. In recent years they have raised thousands to take two groups of young people on world wide experiences to Australia in 2009 & 2011.

All content from Kiddle encyclopedia articles (including the article images and facts) can be freely used under Attribution-ShareAlike license, unless stated otherwise. Cite this article:
Temple, Glasgow Facts for Kids. Kiddle Encyclopedia.