The Ten Tunnels Deviation is the section of track between Newnes Junction and the Zig Zag Signal Box in the Blue Mountains, New South Wales. It was constructed between 1 June 1908 and 16 October 1910 to replace the Lithgow Zig Zag, which limited the length of goods trains over the Mountains. 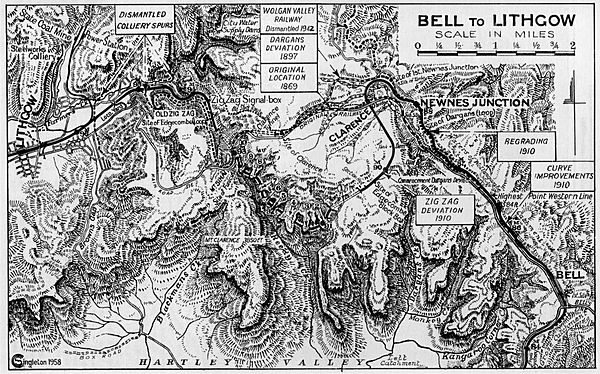 The Act approving the construction of the double line deviation was passed by the New South Wales Parliament in December, 1906.

Construction started near the former Oakey Park Colliery on the 1 in 42 Bottom Road, which had already been duplicated in 1880. It eventually passed Bottom Points before entering a series of ten tunnels. Originally eleven were planned, but one of them was opened out instead, owing to the discovery of rock faults, leaving possibly the deepest cutting in New South Wales. The headquarters for the works was at nearby Clarence, where much of the navvies were temporarily housed. Here a temporary power station was established for rock drills, lighting, compressors, etc. 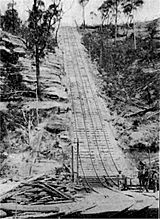 Access to the tunnel locations and the short open sections between the cliffs was extremely difficult. At one isolated point, horses and drays were placed on to the worksite by means of a crane and long jibs. There they remained until the tunnels were completed to provide them with a way out.

The supply of materials for Nos. 8, 9 & 10 tunnels was expedited by the construction of a funicular of the 4-rail type from near Mount Sinai on the original line.

Only experienced miners were employed on the more dangerous tunnelling activities, which were carried out by day and night.

The tunnels were situated on a maximum grade of 1 in 90. The line curves towards Newnes Junction after leaving the tunnels at the Sydney end.

Newnes Junction also had to be moved 660 metres to its current place, and two more tracks were also constructed for the Commonwealth Oil Corporation's Wolgan Valley Railway.

When the deviation was completed, much of the equipment was moved to the other deviation works at Glenbrook, as well as the navvies. As a result, the population of Clarence declined rapidly. The deviation was electrified along with the rest of the line in 1957.

In 1978, the roadbed of the Ten Tunnels was lowered to allow the new double deck interurbans to run on the line. The deviation today is still in use.

All content from Kiddle encyclopedia articles (including the article images and facts) can be freely used under Attribution-ShareAlike license, unless stated otherwise. Cite this article:
Ten Tunnels Deviation Facts for Kids. Kiddle Encyclopedia.