Tesla, Inc. is a company based in Palo Alto, California which makes electric cars. It was started in 2003 by Martin Eberhard, Dylan Stott, and Elon Musk (who also co-founded PayPal and SpaceX and is the CEO of SpaceX). Eberhard no longer works there. Today, Elon Musk is the Chief Executive Officer (CEO). It started selling its first car, the Roadster in 2008.

The Tesla name originally comes from Nikola Tesla. He was an inventor who worked with electricity, electric cars and many other ideas along with Thomas Edison a century earlier.

The Model S replaces the Roadster. It is sold with different battery sizes – for $58,750 it can go 160 miles (260 kilometres). The top end can go 265 miles (426 kilometres) on a charge and with all the extras can cost $100,000. The 2013 Model S was named the MotorTrend Car of the Year, the 2013 Car of the Year by Automobile Magazine and the 2013 World Green Car at the New York International Auto Show. It has a lower drag coefficient than a Toyota Prius, so it uses less energy to push the air out of the way as it moves.

The Model X is a mid-sized, all-electric, luxury, crossover utility vehicle (CUV) made by Tesla, Inc. that uses falcon wing doors for access to the second and third row seats. The prototype was unveiled at Tesla's design studios in Hawthorne on February 9, 2012. The Model X has an official EPA rated 237–295 miles (381–475 kilometres) range and the combined fuel economy equivalent and energy consumption for the AWD P90D was rated at 89 miles per US gallon (2.6 litres per 100 kilometres; 107 miles per imperial gallon).

The Model X was developed from the full-sized sedan platform of the Tesla Model S. The Model X has an EPA Size Class as an SUV, and shares ~30% of its content with the Model S, half of the originally planned ~60%, and weighs about 10 percent more, both are being produced at the Tesla Factory in Fremont, California. First deliveries of the Model X began in September 2015. After one full year on the market, the Model X ranked in 2016 seventh among the world's best-selling plug-in cars. Global cumulative sales since inception totaled about 72,059 units through December 2017. 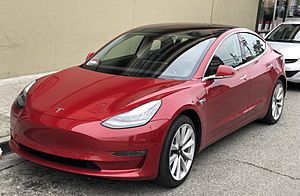 The Model 3 is a mid-size (US) / compact executive (EU) luxury all-electric four-door sedan manufactured and sold by Tesla, Inc. According to Tesla officials, the 2019 Model 3 Standard Battery version delivers an EPA-rated all-electric range of 250 miles (400 kilometres) and the 2019 Long Range Battery version delivers 322 miles (518 kilometres). The Model 3 has a minimalist dashboard with only a center-mounted LCD touchscreen. Tesla stated that the Model 3 carries full self-driving hardware to be optionally enabled at a future date.

Within a week of unveiling the Model 3 in 2016, Tesla revealed they had taken 325,000 reservations for the car, more than triple the number of Model S sedans sold by the end of 2015. These reservations represent potential sales of over US$14 billion. By August 2017, there were 455,000 net reservations, and an average of 1,800 reservations were being added per day.

All content from Kiddle encyclopedia articles (including the article images and facts) can be freely used under Attribution-ShareAlike license, unless stated otherwise. Cite this article:
Tesla, Inc. Facts for Kids. Kiddle Encyclopedia.