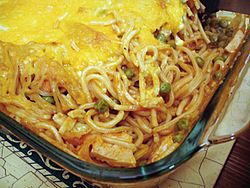 Tetrazzini is an American dish made with diced poultry or seafood and mushroom in a butter/cream and cheese sauce flavored with wine or sherry. It is served hot over linguine, spaghetti, egg noodles, or some other types of pasta, garnished with parsley, and sometimes topped with breadcrumbs, almonds, canned fried onions, or cheese (or a combination). Tetrazzini can be prepared as a baked noodle casserole, sometimes with steps taken to give it a browned crust. Shortcut recipes for home cooking sometimes use canned cream of mushroom soup or other cream soups.

The dish is named after the Italian opera star Luisa Tetrazzini.

It is widely believed to have been invented circa 1908–1910 by Ernest Arbogast, the chef at the Palace Hotel in San Francisco, California, where Tetrazzini made her American debut at the Tivoli as Gilda in Rigoletto on January 11, 1905. However, other sources attribute the origin to the Knickerbocker Hotel in New York City. Good Housekeeping published the first reference to turkey tetrazzini in October 1908, saying readers could find the dish of cooked turkey in a cream sauce, with spaghetti, grated cheese, sliced mushrooms, and bread crumbs on top, at "the restaurant on Forty-second Street."

The chicken tetrazzini was made famous by chef Louis Paquet.

No universal standard for the dish exists, so various parts are missing or substituted in various recipes, for example, another kind of crumbs or different cheeses. The name is often expanded to describe the specific meat used (e.g., chicken tetrazzini, or tuna tetrazzini).

All content from Kiddle encyclopedia articles (including the article images and facts) can be freely used under Attribution-ShareAlike license, unless stated otherwise. Cite this article:
Tetrazzini Facts for Kids. Kiddle Encyclopedia.