The Glen Nature Reserve is a protected nature reserve in the Hunter Region of New South Wales, in eastern Australia. The 2,750-hectare (6,800-acre) reserve, which was gazetted in January 1999, is situated approximately 25 kilometres (16 mi) south-east of Gloucester, off Bucketts Way. 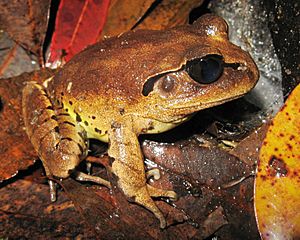 The reserve is predominantly sclerophyll forest, and contains many endangered species of flora and fauna.

The Glen Nature Reserve consists of sub-tropical, sclerophyll forest. The major vegetation types are Eucalyptus and Angophora, with many species of fern and orchid.

All content from Kiddle encyclopedia articles (including the article images and facts) can be freely used under Attribution-ShareAlike license, unless stated otherwise. Cite this article:
The Glen Nature Reserve Facts for Kids. Kiddle Encyclopedia.