The Manacles facts for kids 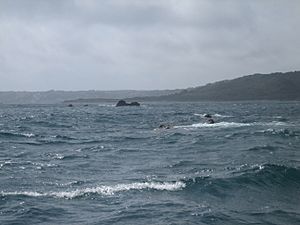 The Manacles (Cornish: Meyn Eglos, meaning church stones) are a set of treacherous rocks off The Lizard peninsula in Cornwall. The rocks are rich in marine wildlife and they are a popular spot for diving due to the many shipwrecks. Traditionally pronounced mean-a'klz (1808), the name derives from the Cornish meyn eglos (church stones), the top of St Keverne church spire being visible from the area.

The rocks are in Falmouth Bay and extends about 1 nautical mile east and south-east of Manacle Point, on the east coast of the Lizard Peninsula. The nearest village is Porthoustock. The reef consist of many submerged rocks and several groups of rocks that break the surface, although some only do so at low water. The Middle Manacles in the north consist of Maen Chynoweth or Morah (Cornish: Morhogh, meaning dolphin), Chyronos, Maen Gerrick and the Gwinges, the eastern group has Vase Rock and Pen Vin, the large group in the centre include the Minstrel Rock, Carn-dhu, Maen Voes (the Voices) and the Quants and Maen Land is in the south-west.

The Manacles Marine Conservation Zone was designated on 21 November 2013 and covers an area of approximately 3.5km2. The MCZ extends from Porthoustock Point south to Polcries and extends 2 km from the coastline. The seabed varies within the site and includes rocky reefs, vertical rock faces, subtidal sand and intertidal coarse sediment. The sediments in shallow water support Maerl beds. Maerl is a collective term for several species of red seaweed which have a hard, chalky skeleton. It can be an important habitat for juvenile animals, anemones, sea cucumbers and sea urchins.

There have been over a thousand lives lost from more than one hundred ships that have been wrecked on The Manacles. The reef lying on the eastern approach to the port of Falmouth is one reason for the large number of wrecks, although some ships such as the SS Mohegan were many miles off course when they ploughed into the rocks.

In 1885 Trinity House was petitioned for a lightship to be moored near the rocks. Over the previous ten years, sixteen vessels, with 693 crew and passengers were wrecked and the value of the ships and their cargoes was estimated to be about £100,000.

All content from Kiddle encyclopedia articles (including the article images and facts) can be freely used under Attribution-ShareAlike license, unless stated otherwise. Cite this article:
The Manacles Facts for Kids. Kiddle Encyclopedia.